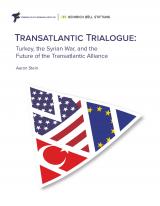 This report by Aaron Stein from the Foreign Policy Research Institute summarizes the two-day long Turkey Trialogue including six panels in a concise, clear form.

The international rule-based order is under threat. The "Alliance for Multilateralism", initiated by the German and French Foreign ministers, aims to re-establish stability and reliability between nation states. What are its chances of success?

The Future of Transatlantic Relations

Two years after President Trump's election we have a look at the political, social and economical landscape, the changes in multilateral relations in the fields of trade, security policy as well as climate and energy. President Trump is at the same time a symptom and a cause for the divide that splits the US. But which position can the EU adopt in transatlantic relations?

During the past seven decades, transatlantic ties have been tested repeatedly. They have included economic conflicts, competition for markets, dealing with armed conflicts and cultural clashes. Europe and the US share both the challenges and the consequences for either success or failure which makes the transatlantic relationship more important now than it has been since the end of the Cold War.

With an unleashed US president seemingly determined to destroy tried and trusted transatlantic ties along with the multilateral order that the United States created together with its Western European allies after WWII, the European Union finds itself more and more on its own. The EU has to (re)define what role it wants to play in a global context and in its neighbourhood. In light of the loss of important military and soft power through Brexit and the ongoing internal crisis characterised by Euroscepticism and right-wing populism, this prospect is uninviting, but urgency and necessity are obvious.

In this web dossier, we will focus on three topics: the Western Balkans enlargement strategy; the conflicts in the Middle East (Jerusalem, Syria), the refugee crisis and the transatlantic tug-of-war. ​

The EU has to (re)define what role it wants to play in a global context and in its neighbourhood. In this web dossier, we will focus on three topics: the Western Balkans enlargement strategy; the conflicts in the Middle East (Jerusalem, Syria), the refugee crisis and the transatlantic tug-of-war.

The End of the Concept of ‘the West’?

The West is more and more devided and global strategic interests are diverging. The impact of the US President on views and transatlantic trust is significant. Protectionism and populism undermine Western relations.

The Transatlantic Drift and the Waning of Turkey’s 'Strategic Westernness’

NATO and Transatlantic relations have to be redefined in the context of a multispeed Europe and geopolitical tensions and security matters Can a reshaped Euro-American alliance confront Russian provocations and terrorism? And what is Turkey’s strategy?

The Trump Era or Interregnum? The Changing View of Europe in the United States

Trump’s accession to the White House shows that his policy constitutes a turning point in transatlantic relations but also shows certain indices of continuities in American foreign policy of the last decades.