Dealing with scarcity: equitable access to Covid-19 vaccines in Colombia

E-paper
The global Covid-19 pandemic has hit Colombia strongly. This article presents an overview of the vaccination programme in Colombia and some recommendations for international actors to speed up the process and guarantee equitable access to vaccines.
By Diana Guarnizo Peralta, Johnattan García Ruiz and Diana León 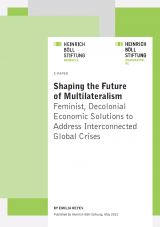 The undeniable connections among the multiple crises that humanity faces today -- climate change, biodiversity loss, inequality, poverty, and the Covid-19 pandemic -- demand interconnected, rather than segmented, macro solutions. Responses must be systemic and address the structural dynamics and shortcomings of governance, economics and finance. A feminist and decolonial framing provides a lens for proposed reforms.

CAP Beyond the EU: The Case of Honduran Banana Supply Chains

Article
The EU Common Market Organisation (CMO) and its import/export licences are intertwined with trade power concentration in multinational exporters, EU supermarket price pressure on banana producers, and the impact on labour rights in Central America. Deeper impact assessments should be made in Central America countries before signing Association Agreements with the EU.
By Melina A. Campos 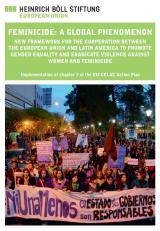 A new framework for the cooperation between the European Union and Latin America to promote gender equality and eradicate violence against women and feminicide.

Feminicide and Clandestine Abortions in the EU and Latin America

The European Union has to revive its alleged climate leadership, build up trust and confidence, and form coalitions in order to make the 2015 Climate Summit (COP21) in Paris a success. Together, the EU and Latin American and Caribbean countries make up almost one third of the parties to the United Nations Framework Convention on Climate Change. An alliance between Europe and Latin America could revive and lead the negotiations towards a fair and ambitious global climate deal in Paris.
By Silvia Brugger and Gustavo Hernández

Natural resources form a huge part of the wealth of developing countries. However, that is only a potential wealth for the people.

Buen Vivir is a Latin American concept which can be understood in three differing ways, but mainly as a critique to the Western way of development. The equivalent school of thoughts in Europe is based on the, the Green New Deal, which proposes a strategy to confront the challenges of global warming, finite resources and etc. Despite this connection, the Green New Deal it is not a goal in itself, it is just a tool, differing from a political philosophy like Buen Vivir.