As one of the world’s largest importers of agrochemicals and exporters of agriculture goods, Brazil sets record for pesticide consumption. A significant part of the pesticides used there is produced in the European Union – and highly hazardous.

Teaser Image Caption
Glyphosate is classified by the WHO as probably carcinogenic. It is one of the best-selling pesticides in Brazil – almost 200,000 tonnes were sold in 2018.

Around 14 percent of the total volume of pesticides exported by the European Union to the Mercosur countries – the South American trade bloc with the full members Argentina, Brazil, Uruguay, and Paraguay – consists of substances banned or never authorized in the European Union itself. Although they are produced and sold by companies headquartered in these countries. Amongst the top ten most commonly used pesticides in Brazil, four lost their authorisation in the European Union: atrazine, acephate, chlorothalonil, and chlorpyrifos. In 2020, 33,300 tonnes of atrazine, 29,900 tonnes of acephate, 24,100 tonnes of chlorothalonil, and 8,800 tonnes of chlorpyrifos were sold in Brazil, also via EU based companies.

The European Union is an important trading partner of Mercosur. The two trade blocs reached an agreement on a free trade deal in 2019. Before it can enter into force, it requires the approval of the European Parliament and the national parliaments of the 27 EU Member States, and the Mercosur Countries. The deal would largely lift tariffs and increase import quotas. Concerns about environmental and social impacts were among the contentious issues that have led to more than 20 years of trade negotiations between both parties.

If the EU-Mercosur trade agreement is ratified, tariffs on agrochemicals will be reduced by up to 90 percent, likely leading to an increase in the export of dangerous pesticides from the EU to Mercosur countries. The deal is also expected to boost exports of crops and crop-based products, including soy, sugarcane, and sugarcane-derived ethanol – that depend heavily on pesticides. The deal is also expected to increase exports of meat products such as poultry, which depend on soy-based animal feed, driving even more pesticide use. Brazil is the biggest exporter of soybeans, beef, chicken and sugarcane worldwide, besides being the second largest exporter of grains in the world. This role in the global market as exporter of commodities and biofuels also led to deforestation, biodiversity destruction, violation of Indigenous rights – and also an increase in pesticide use. The total amount of pesticides consumed by Brazil in 2010 was 384,501 tonnes and the volume has risen year after year, until it reached 685,745 tonnes in 2020, with a value up to 28 billion euros.

About half of this total volume of pesticides sold in Brazil is destined for soybeans; together with sugar cane, maize, and cotton these crops constitute 82 percent of commercial pesticide use in the country. Past increases in pesticide use are mainly due to the increase of the cultivated areas used to produce animal feed and to the production of ethanol – also driven by EU demand.

The increase in the use of pesticides in Brazil goes hand in hand with the increase in areas cultivated with genetically modified organisms. Currently 92 percent of soy, 87 percent of maize, and 94 percent of cotton cultivated in Brazil are genetically modified crops. The use of these substances has severe impacts on the health of the Brazilian population: Between 2010 and 2019, 56,870 people were poisoned by pesticides in Brazil, which represents an average of 5,687 cases per year, or 15 people daily. However, the Ministry of Health in Brazil itself admits that the number of unreported cases is high and that, consequently, the real total number of poisoned people is even higher.

But there are also important movements of resistance to this model of agricultural production in the country. For example, the Landless Rural Workers’ Movement (MST) has played an important role in agroecological production, developing this strategy in around 700 settlements. During the pandemic, the Landless Rural Workers Movement donated more than 2,300 tonnes of food from ecological farming to poor populations in the cities.

Pesticide Atlas 2022: Facts and figures about toxic chemicals in agriculture

Atlas
The Pesticide Atlas 2022 is a comprehensive overview of facts and data on toxic chemicals used in agriculture, their impact on biodiversity, the climate, people and planet’s health, and alternative solutions for more sustainable food and farming systems. 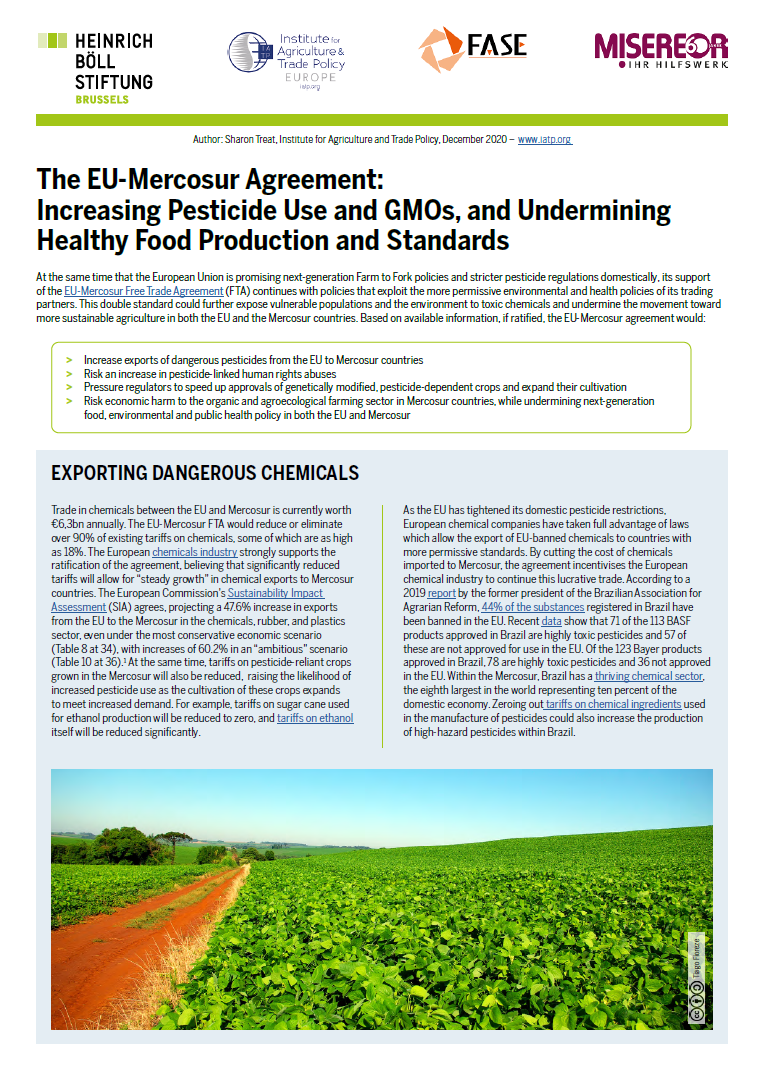 The EU-Mercosur Agreement: Increasing Pesticide Use and GMOs, and Undermining Healthy Food Production and Standards

At the same time that the European Union is promising next-generation Farm-to-Fork policies and stricter pesticide regulations domestically, its support of the EU-Mercosur Free Trade Agreement (FTA) continues with policies that exploit the more permissive environmental and health policies of its trading partners. This double standard could further expose vulnerable populations and the environment to toxic chemicals and undermine the movement toward more sustainable agriculture in both the EU and the Mercosur countries.