Nuclear weather in France: no clouds in sight

Commentary
Thirty-five years ago, a few days after the Chernobyl disaster, authorities throughout Europe alerted the population to the radioactive cloud. All of them? No. In France, where more than thirty nuclear reactors were already in operation, the authorities waited several weeks before acknowledging that the cloud had passed over the country.
By Jules Hebert 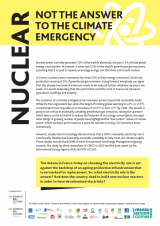 Nuclear: not the answer to the climate emergency

The debate in France today on choosing the electricity mix is set against the backdrop of an ageing production infrastructure that is earmarked for replacement. So, what electricity mix is the answer? And does the country need to build new nuclear reactors in order to have decarbonised electricity?

Background
Europe could still emerge from the pandemic crisis sustainably positioned and strengthened, but only if the Franco-German tandem works. The plans for a reconstruction fund of 500 billion euros mark a turnaround in the right direction.
By Dr. Jens Althoff

Vive La Fraternité: Why EU Civil Society Must Learn from the French

Blog
Civil society and citizens take over the duties in welcoming refugees where Member States and the EU fail. Parts of civil society have awoken across borders to contest policies and laws that they believe to be contrary to the ‘core principles’ of both Member States and the EU, as well as contrary to broader humanitarian, religious or political principles.
By Jennifer Allsopp

Article
During the six months of tedious negotiations to put a German coalition in place, governments across Europe, the French in particular, have been waiting impatiently for a push for European reform from Berlin.
By Julian Rappold

Feminicide: The Need for a Wider Campaign

Though there is still no public debate about Feminicide in France, recent legislation has begun to recognize gender-based murder but it is far from a priority for French authorities.
By Angela Muller and Anne-Cécile Mailfert

In Good Company. The German Energy Transition and Its Echo in France

The chosen method - retention of two thirds of nuclear energy - is only at first sight incompatible with the idea of the German energy transition. The objective is strikingly similar.
By Kathrin Glastra and Andreas Rüdinger

View from Paris: The need for certainty

The three-word motto cited by Hollande in his statement could serve as a summary of what is needed after the Brexit: “freedom, solidarity, and peace”.
By Manuel Lafont Rapnouil

The refugee crisis - Paris and Berlin view through different lenses

In France economic and social problems, terrorism and internal security are viewed as more important than the migrant crisis. Seeing the migrant flows as a result of conflicts in the Arab world they deal with the problem with military assistance.
By Claire Demesmay

Following the attacks in Paris, a global coalition in the fight against ISIL emerged. History seems to repeat itself. What have we learned from the events since 2001, and how did it come to the current escalation?
By Hans Joachim Giessmann