Analysis
In 2022, European green parties increased their number of seats in most elections while witnessing some of their fiercest opponents win power. As such, the year was somewhat of a Pyrrhic battle for the Greens at the ballot box: though battles were technically won, the overall outcome can hardly be considered a complete victory.
By Tobias Gerhard Schminke

France at a crossroads: this time, democracy itself is at stake... again

Analysis
After the first round of the presidential elections in France, there is everything to play for. The incumbent President, Emmanuel Macron, is in the lead (27.84%), but this time, Marine Le Pen (23.15%) has a real chance of victory in the runoff of 24 April 2022. This is our analysis of the elections.
By Jules Hebert

The French “meanwhile” on vaccine equity

Commentary
While nearly 82% of Europeans are fully vaccinated, this is the case for just 11% of Africans. This vaccine gap could overshadow discussions between the heads of state of the two continents at the summit to be held in Brussels on 17 and 18 February between the European Union and the African Union. France, which currently holds the Presidency of the Council of the EU, has been called upon to act to waive patents on Covid-19 vaccines. Emmanuel Macron is the champion of the “global licence” project.
By Nicolas Kirilowits

Challenging Janša, Orbán and Macron: the electoral 2022 year from a Green perspective

Analysis
2022 promises to be an exciting electoral year. At least seven seats of the European Council are up for grabs, of which the votes involving Emmanuel Macron and Viktor Orbán may electrify electoral enthusiasts the most. This piece reviews which European leaders will need to defend their positions and how the European Green Party (EGP) members are performing in polls before national, regional and local elections in Europe during 2022.
By Tobias Gerhard Schminke

Little room in France for government manipulation of information

Commentary
In France, government disinformation is a rare phenomenon and the truth is swiftly revealed, thanks in particular to the work of certain media sources published information. Although it is not widespread, all manipulation has its consequences, gradually increasing the people’s distrust of institutions.
By Peggy Corlin

Nuclear weather in France: no clouds in sight

Commentary
Thirty-five years ago, a few days after the Chernobyl disaster, authorities throughout Europe alerted the population to the radioactive cloud. All of them? No. In France, where more than thirty nuclear reactors were already in operation, the authorities waited several weeks before acknowledging that the cloud had passed over the country.
By Jules Hebert 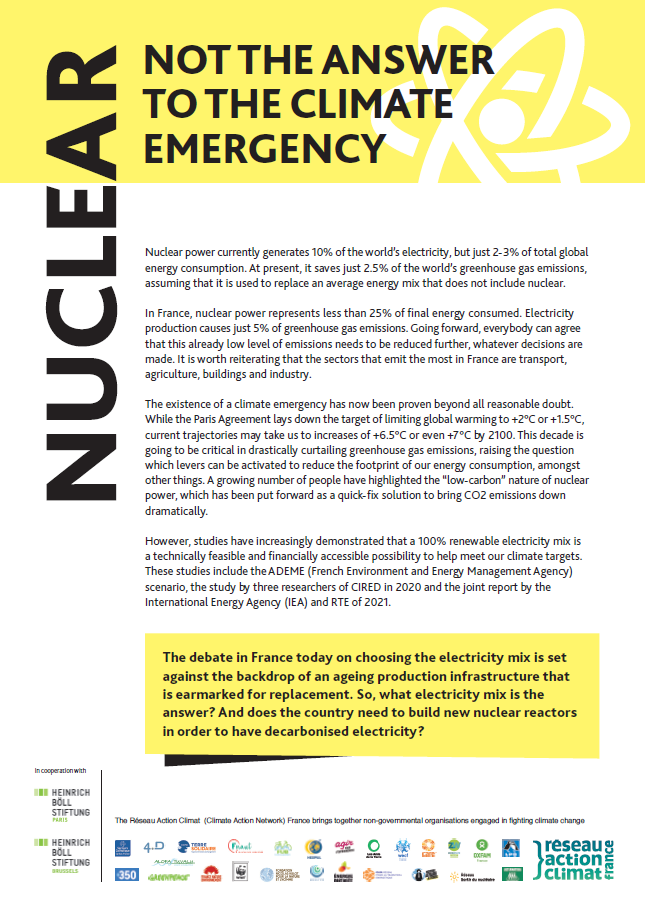 Nuclear: not the answer to the climate emergency

The debate in France today on choosing the electricity mix is set against the backdrop of an ageing production infrastructure that is earmarked for replacement. So, what electricity mix is the answer? And does the country need to build new nuclear reactors in order to have decarbonised electricity?

Background
Europe could still emerge from the pandemic crisis sustainably positioned and strengthened, but only if the Franco-German tandem works. The plans for a reconstruction fund of 500 billion euros mark a turnaround in the right direction.
By Dr. Jens Althoff

Vive La Fraternité: Why EU Civil Society Must Learn from the French

Blog
Civil society and citizens take over the duties in welcoming refugees where Member States and the EU fail. Parts of civil society have awoken across borders to contest policies and laws that they believe to be contrary to the ‘core principles’ of both Member States and the EU, as well as contrary to broader humanitarian, religious or political principles.
By Jennifer Allsopp

Article
During the six months of tedious negotiations to put a German coalition in place, governments across Europe, the French in particular, have been waiting impatiently for a push for European reform from Berlin.
By Julian Rappold