DossierConference on the Future of Europe

The Conference on the Future of Europe is a citizen-led series of debates enabling people from across the EU to share ideas and help shape our common future. Via the multilingual digital platform of the Conference you can join an event, exchange ideas or organise an event to discuss what should be the EU positions on nine key topics. In this online dossier, we will invite our partners from civil society, academia, politics, think tanks and media to comment on the current developments of the Conference.

The key nine topics are: Climate change and the environment; Health; A stronger economy, social justice and jobs; EU in the world; Values and rights, rule of law, security; Digital transformation; European democracy; Migration; and Education, culture, youth and sport.

Survey
As the federal elections in Germany draw nearer, Angela Merkel’s time as Chancellor, and thus an era of German EU policy-making, is coming to an end. A new German federal government will step onto the EU policy stage – mere months after a united response to the Covid-19 crisis was found in the shape of the EU Recovery Fund, but also after criticism was levied at the EU for its vaccine procurement strategy. This year’s “Actually European!?” study examines the expectations that citizens have of the next German government’s EU policy. Moreover, the long-term study, now in its third year, surveys what Germans perceive to be the country’s role within the EU.
By Heinrich-Böll-Stiftung and Das Progressive Zentrum

Dossier
The impact of the Covid-19 pandemic on Europe's economy, health systems and democracy is enormous. In terms of European policy, it will now be important to shape the economic construction in Europe in a socially and ecologically sustainable way. Municipalities are now seen as the new bearers of hope in this endeavour and initiatives at the local level are already making a difference in many areas and are seen as potential drivers of the socio-ecological transformation. The focus of this years’ Annual European Conference is thus put on the local dimension of the European Green Deal.
By Heinrich-Böll-Stiftung

Conference on the Future of Europe: a real chance for reform, or just a guide for policy-making?

Analysis
The EU is undeniably crying out for fundamental reforms. The Conference on the Future of Europe, launching on 9 May 2021, is meant to create the first-ever genuine public space between European citizens of all Member States and enable encounters beyond national frameworks. Unlikely to deliver major reform plans, though, this platform still has the potential to provide important impulses to crucial issues for Europe’s future.
By Andreas Bühler 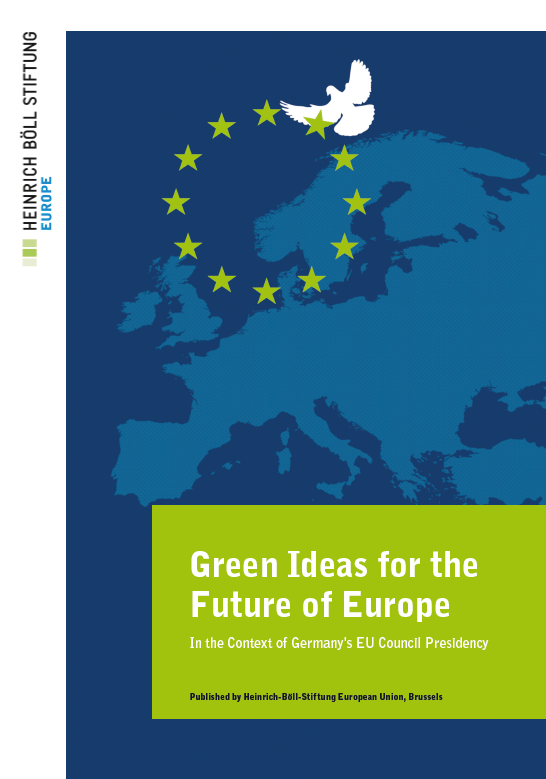 Green Ideas for the Future of Europe - Publication

Through 20 conversations with Green decision makers and civil society actors, held prior to Germany's EU Council Presidency, the Heinrich-Böll-Stiftung has striven to contribute to a profound debate about the consequences of the pandemic and the future of the European project.

The EU Pact on Migration and Asylum

European Mobility Atlas 2021: Facts and Figures about Transport and Mobility in Europe