The European Feminist Platform connects activists, scholars and political decision makers to collect, display and contextualize knowledge and best feminist practices in order to make them fruitful for feminist struggles and policies.

Our mission is to shape a feminist future. 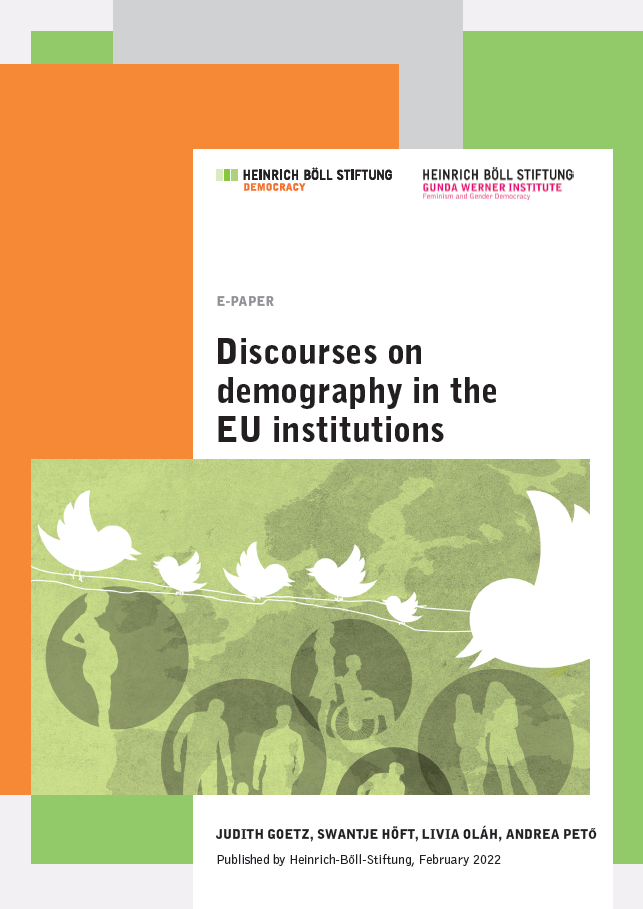 Discourses on demography in the EU institutions

This paper finds that the decline of birth rates has been addressed by the European Commission in a way that leaves it as an open frame, which is filled by the right-wing parties. With respect to demographic discourses on migration, the EU Commission seems to have promoted an interpretative template that also allows for arguments on anti-migration discourses.

Böll·Europe Podcast #0 | Discourses on demography in the EU institutions

Liberal and progressive political actors show a tendency towards skirting around demographic issues which has left a vacuum for the far-right to fill with racist, anti-immigration, and anti-abortion discourses. Presented by Esme Nicholson.

The goal of the European Feminist Platform is to:

The European Feminist Platform acts by:

Members of the European Feminist Platform

Articles by our members & friends

Commentary
What does care mean in a Covid-19 pandemic context? Why does care fail and gender-based violence becomes even more resilient in itself, despite being conceptualised as a "pandemic within a pandemic" in a context of intensifying sexism, culturalist stereotypes and xenophobia, not to mention social policing and the intensive securitization of borders and mobility?
By Eirini Avramopoulou

Time as an instrument of domination and liberation: four reasons why we need a time revolution in the healthcare sector

Commentary
How can we merge all the things that are happening right now, on Lesbos, in Kabul and in Ahrweiler, and map them on our own timeline? How do we know what is important for our present time? Melanie Wilke and Hannah Gruber ellaborate on the societal contexts behind the ever-present lack of time, particularly in relation to health and healthcare.
By Melanie Wilke and Hannah Gruber

“2015 must never be allowed to happen again”: that is the mantra

Commentary
This short sentence is all you need to understand why the German government committed an error of judgment concerning Afghanistan. An error of judgment that kills people every day – and democracy throughout the world as well, by the way.
By Dr. Ines Kappert

Three readings of one law: Reregulating sexuality in Hungary

Commentary
The Hungarian government has received international criticism over a new law that bans the depiction or promotion of homosexuality to those under the age of 18. Andrea Pető argues that the law may well prove to be a miscalculation by the country’s Prime Minister, Viktor Orbán.
By Andrea Pető

Commentary
Modern-day authoritarians will boil you like a frog, whilst slowly turning up the heat. As a citizen of a democratic state, governed by the rule of law, you won’t suddenly wake up one day to find yourself in an authoritarian regime. It will creep up on you. Hiding behind empty slogans such as “regaining national sovereignty” and “national pride”.
By Eliza Rutynowska

Four reasons why Gender Studies has changed because of illiberal attacks, and why it matters

Commentary
Systematic and systemic attacks on Gender Studies are part of anti-gender campaigns and online public harassment, associated with the anti-gender movement, a nationalist, neoconservative response to the triple crisis (migration, financial and security). These illiberal attacks are gaining much support all over Europe.
By Andrea Pető

Defending Plurality: Four Reasons Why We Need to Rethink Academic Freedom in Europe

Commentary
Academic freedom is under attack, both in authoritarian democracies and in liberal Western democracies. Dominant discourses about academic freedom and free speech in the global north, lately especially in France and Germany, focus on an alleged threat to academic freedom through "political correctness" and "cancel culture", that, under scrutiny, often turn out to be exactly the opposite, namely defences of plurality and critical voices.
By Dr. Karsten Schubert

Four reasons why Poland’s war on abortion should scare you

Commentary
This is not just ‘Poland being Poland’. These actions are illegal, inhumane and could spread across Europe – and this is just the beginning.
By Neil Datta

Article
The change of government in Austria after the Ibiza affair on the one hand lead to a withdrawal of antifeminist (politically right) populist measures of the prior turquoise-blue government. On the other hand, existing structures of disadvantage and oppression have not been questioned by the successor government.
By Judith Goetz

A feminist exploration #3: The great replacement

A feminist exploration #6: SRHR, democracy & rule of law in Poland

A feminist exploration #7: Constructing “security” during a pandemic

A feminist exploration #8: Gender-based violence, care provisions and resilience during Covid-19 in Greece

A feminist exploration #9: Discourses on demography in the EU institutions

Is the EU a feminist actor?

Dossier
The protection of women in armed conflicts as well as their equal participation in peace processes and negotiations contribute to the promotion of world peace. Nevertheless, nation states continue to use armament and deterrence as the preferred mode of handling such conflicts.

No Women - No Peace: 20 years of UNSC Resolution 1325 on Women, Peace and Security

Dossier
On 31 October 2000, the UN Security Council adopted the Landmark Resolution 1325 on Women, Peace and Security. On its 20th anniversary, this dossier portrays women from 20 countries that make a difference in peace and security.

E-paper
The undeniable connections among the multiple crises that humanity faces today -- climate change, biodiversity loss, inequality, poverty, and the Covid-19 pandemic -- demand interconnected, rather than segmented, macro solutions. Responses must be systemic and address the structural dynamics and shortcomings of governance, economics and finance. A feminist and decolonial framing provides a lens for proposed reforms.
By Emilia Reyes

Dossier
A collection of articles which show different aspects of gender questions in a world of data collection and digital surveillance.

The great leveller? How Covid-19 responses could widen gender inequality in the UK

Commentary
The coronavirus pandemic – just like society – runs along fault lines of gender, race, class and other inequalities. With women over-represented in vulnerable frontline jobs, there are fears that technologies proposed to tackle the pandemic could inflict harms that differ based on gender.
By Ella Jakubowska 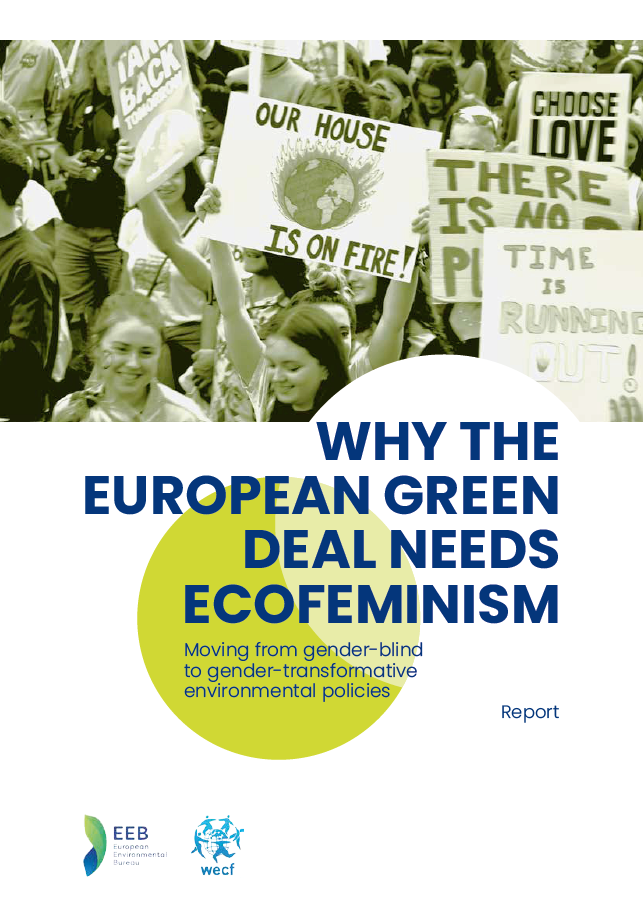 Conversation
Is the European Green Deal gender blind? How can the EU deal with the danger of a backlash on gender equality in the face of pandemic and the subsequent economic crisis? Which ways forward are there to better connect the feminist and climate movements?
By Dr. Ines Kappert

A project supported by