The unsavoury link between oligarchs, the banking sector, the media and politics is what characterizes, in a nutshell, the state of the Greek media landscape. The prolonged financial crisis has had a decisive role in further hampering media freedom in the country, posing a real threat to the quality of democracy in Greece.

It was Edmund Burke that first referred, in a speech in the House of Commons back in 1787, to the media as the fourth estate. And he couldn’t have been more right and foresightful, as journalism and the media have since then played an increasingly central role in the functioning of stable democracies around the world. The flow of accurate and timely information is the fuel that feeds citizen participation and oversight of state institutions and elected officials. It is, to put it bluntly, what keeps the otherwise fragile mechanisms of democracy in place.

The media, however, are not just an integral part of democracies because of their oversight role and their capacity to speedily move information from the top of the decision-making pyramid to the bottom. In fact, with the emergence of internet technologies and the fairly recent introduction of social media to our everyday lives, the media institutions have significantly increased their capacity to influence public debate, set agendas and, to an extent, even shape perceptions, opinions and political preferences.

One could, therefore, safely argue that just as the media can reinforce democracy, they may also, under the right circumstances, contribute to its erosion. The state or corporate capture of the media is indeed one of the main challenges faced by contemporary democracies today.

The latest World Press Freedom Index for 2021, recently published by Reporters Without Borders, paints a rather bleak picture of the state of media freedom across Europe. It captures, in fact, what seems to be a growing tendency, especially among Eastern and Southern European Member States, to weaken the independence of the media in an effort to galvanize specific political narratives favourable to governments.

According to the most recent Eurobarometer survey (National Report for Greece), the media in Greece ranks among the least trusted by the public compared to other ΕU Member States. They may not face the type of overt intervention from governments as witnessed in some Eastern European countries, but frankly, that is probably due to the fact that such drastic measures are not deemed necessary to secure their allegiance.

The impact of the ten-year-long financial and political crisis, along with the dogmatic austerity measures that were forced upon the country, did not just contribute to scarring the very social fabric of Greek society and further damaging the economy; in fact, it also played a detrimental role in the quality and independence of Greek media, significantly altering the country’s media landscape.

A large number of media businesses collapsed, having no recourse to the questionable bank loans they had had access to in previous years. Some changed ownership, as older players were pushed out and new players appeared. With very few exceptions, most of the media outlets that gradually emerged became staunch supporters of the prevailing political narrative.

Most, if not all, mainstream Greek media outlets are currently directly or indirectly owned by a handful of shipping industry magnates and influential businessmen. What is more, the majority of them maintain proven close ties to the ruling New Democracy party and members of its leadership. To be more precise, Evangelos Marinakis is the proud owner of the most popular TV channel in the country, four major newspapers, an online news portal, a radio station and Αrgos, the country’s major press distribution agency. Ioannis Alafouzos is the owner of an overtly pro-government TV channel, two radio stations and the historic daily newspaper Kathimerini. The Vardinogiannis family is the owner of two major TV channels and three radio stations. Ivan Savvidis, a fairly new economic player in Greece and former member of the Russian Parliament, owns a recently founded TV channel and a popular newspaper, while the Kyriakou family owns one of the most established TV channels and two radio stations.

What is more, the revolving door phenomenon between journalism and politics has intensified significantly over the past few years. New Democracy, during the last elections, featured 28 candidates with a background in journalism, with 12 of them eventually making it into Parliament. Journalists deciding to follow a political career does not necessarily constitute a problem per se. One needs to consider however that a conflict of interest comes into play when the latter report on news or provide seemingly unbiased analysis whilst in negotiations to join a political party. Overall, one could define the interplay between mainstream media and government as something of a symbiotic, or if you like, parasitic relationship, whereby political and economic favours are exchanged for favourable media coverage. This unfortunately does not constitute a mere opinion, in fact, the problematic relationship between political parties and the media has been highlighted in the findings of an investigation conducted by a committee of inquiry of the Hellenic Parliament.

The deepening of this relationship over the past years has undoubtedly been detrimental to the quality and independence of Greek journalism and reporting. Investigative journalism has become a thing of the past; furthermore, questioning the government’s policies and criticizing its decisions seldom occurs, while biased and partisan reporting has unfortunately become the new norm. 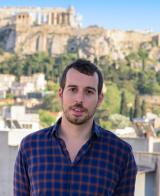 Stefanos Loukopoulos is the Co-Founder and Director of the non for profit parliamentary monitoring, transparency promoting organization Vouliwatch. He holds a BA in Political Science, an MA in International Relations and one in International Conflict Analysis. Completed his studies in the UK and Belgium. He has worked in the civil society sector  both in London and Brussels as well as in the European Parliament. Founding member of the international association “Parliamentwatch Network” and former selected member of the first “Council of Citizens Oversight” body of the Greek public broadcasting service (ERT). Stefanos is actively involved both at national and international level in the fields of open government, parliamentary openness, civic technology, political accountability and the freedom of access to information.

Can it get any worse? Apparently so!

The problematic situation described above was severely exacerbated following the 2019 national elections and the coming into power of New Democracy under the leadership of Kyriakos Mitsotakis. Having enjoyed an overwhelmingly favourable press coverage as leader of the opposition, which was key to his party’s victory, the current Greek PM proceeded, upon taking office, to make sure that this would not change.

Among his government’s first actions, in fact, was to bring the Athens-Macedonian News Agency (the National News Agency of Greece) under the direct supervision of the Prime Minister’s Office, while the former director of Mr. Mitsotakis’s press office, Mr. Konstantinos Zoulas, was appointed as the head of ERT (the national broadcasting service). The impact of these moves was soon felt by both viewers and the staff working at ERT. According to the latter, in fact, a note was pinned on the notice board of the TV station’s news production room that instructed journalists not to air pictures and videos showing the Prime Minister feasting with local politicians on the island of Ikaria, in breach of the strict quarantine rules that were in place at the time.

Controlling state-owned media, however, was apparently not enough; in fact, the COVID-19 pandemic has provided the government with a golden opportunity to demonstrate its gratitude towards private media outlets for their ongoing support.

At the very start of the COVID-19 outbreak in Greece, the Greek government proceeded to allocate €20 million to media outlets for them to carry “Stay at Home” public health messages, despite the provision in the Greek Constitution stipulating that public messages of the sort should be aired free of charge. What is more, in an effort to circumvent its obligation to make public all transactions conducted by the state, it proceeded to outsource the distribution of these funds to a private media shop company.

Despite attempts to keep the list of beneficiaries and the individual sums allocated to each one of them out of the public eye, the government eventually caved in and published the list of beneficiaries (without, however, including the sums); this followed pressure from the independent watchdog organisation Vouliwatch, the opposition parties and the general public. Following a careful analysis, the list was found to include, amongst others, non-existent news websites and radio stations that are no longer operational.

Attempts by the mainstream media to downplay the story were unsuccessful, as a social media furore erupted that eventually, months later, led the government to publish the full list, which this time included the allocated funds. What became evident from this was that the funds had been disbursed in a way that was closely aligned to the government’s narrative. Media outlets critical of the government seemingly received less than one per cent of the total sum, while neutral media outlets received significantly less than their less popular, but aggressively pro-government, counterparts. Additionally, one particularly vocal, yet popular, anti-government outlet was excluded outright from the funding.

If this wasn’t enough, in an attempt to avoid spoiling the prevailing narrative of the government’s success in handling the pandemic, medical staff were banned from talking to the media and journalists had to get the government’s permission before reporting in hospitals.

The above, along with additional cases not mentioned in this article for the sake of brevity - such as the forced resignation of journalist Dimitra Kroustali following her report on the flaws in the system used to track COVID-19 cases - have contributed towards the establishment of a media landscape that systematically distorts reality, covers up scandals and fails to perform its oversight role with regard to the government.

Media capture has historically manifested in four forms—plutocratic, state, corporate and intersecting. In trying to untangle and analyse the Greek media context, a combination of the four would best describe the current state of affairs.

The media capture by the Greek government, and its ongoing symbiotic relationship to media owners, may have a significantly negative impact upon the quality of Greek democracy as a whole. The continuous promotion of a one-sided narrative in favour of the government, the omission of news-worthy stories and the under representation of critical voices in the public discourse will all most definitely play a decisive role in shaping popular consent, public opinion and political preferences. Less media freedom means less democracy, and it is therefore in every citizen’s interest to support watchdog organisations and independent media, while at the same time demanding solid regulatory approaches to media concentration and ownership.

Commentary
The book #FakeYou shows that public and legislative policies used in the fight against disinformation, which have been pursued both in Spain and in other countries because of (or rather, with the excuse of) the so-called “new” phenomenon of fake news, often actually serve to distract from the real solution.
By Simona Levi