The Asian Infrastructure Investment Bank (AIIB) is a multilateral bank for infrastructure financing and plans to become the leading global institution for financing infrastructure projects. This article shows why the bank must intensify its efforts to inform the public in a timely manner about the environmental and social risks of its projects.

Transparency and public participation are paramount in mitigating the environmental and social risks of large-scale infrastructure projects. But the Beijing-based Asian Infrastructure Investment Bank is not heeding the message, even as the climate emergency and irreversible biodiversity loss reach critical levels. 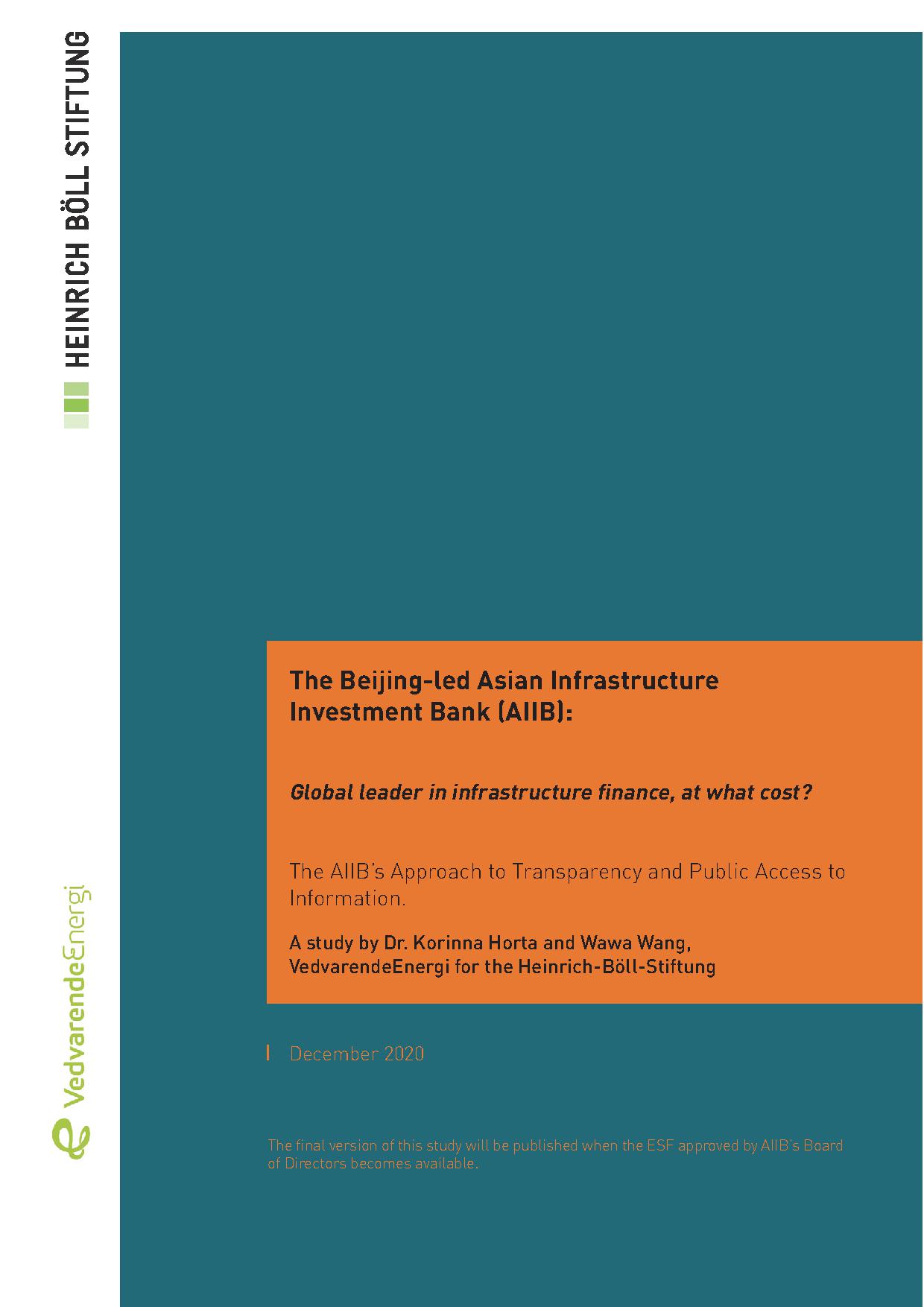 The Beijing-led Asian Infrastructure Investment Bank (AIIB): Global leader in infrastructure finance, at what cost? The AIIB’s Approach to Transparency and Public Access to Information

By Korinna Horta and Wawa Wang

LISBON/AARHUS – The Beijing-based Asian Infrastructure Investment Bank (AIIB) opened for business in 2016 and rapidly established itself as a major multilateral development institution. It now aims to become the world’s leading financier of large-scale infrastructure by 2021. But the bank first needs to raise its game regarding timely public disclosure of its projects’ environmental and social risks.

The AIIB currently has 82 member states, with a further 21 countries expected to join soon. Europe’s largest economies – Germany, the United Kingdom, France, and Italy – openly defied former US President Barack Obama’s administration by becoming founding members of the bank. Their decision handed China a diplomatic victory and demonstrated its ability to divide traditional allies. The United States and Japan still have not joined.

European membership has helped the AIIB establish its international credibility and receive a AAA credit rating. This puts the organization on a par with traditional multilateral development banks such as the World Bank, and enables it to raise additional funds on international capital markets to increase its initial capital of $100 billion.

European governments justified their decision to join the AIIB by stating that they would push for the bank to adopt the highest international standards – starting with clear time-bound rules on publishing key project documents. Without such rules, an investment’s environmental and social risks come to light too late to press for meaningful mitigation measures.

Large-scale infrastructure projects such as export corridors, power plants, and large dams invariably carry high environmental and social risks. They are also all too often linked to corruption and increasing levels of public debt. Their impact can transform entire regions, affect countless communities, and contribute to climate change and irreversible biodiversity loss.

Transparency and public participation are paramount in managing the risks of such projects. But the AIIB’s driving force and largest shareholder, the Chinese government, operates in a political context without checks and balances. It has increasingly tightened its grip on domestic civil society and the media, and has largely silenced defenders of human rights and even public health.

Furthermore, the AIIB has adopted a governance model that emphasizes “efficiency.” Under the institution’s so-called “accountability framework,” the board of directors, which represents member countries, delegates increasing decision-making power regarding project financing to the bank’s president.

At first, the AIIB mostly contributed to other multilateral lenders’ investments, so the policies of the lead bank applied. But the AIIB will increasingly develop its own lending pipeline – under its own rules – with the objective of becoming the global leader in infrastructure finance. It will target Africa, Latin America, and Europe as well as Asia.

The AIIB’s main policy instruments regarding transparency and public access to information are its 2018 Policy on Public Information (PPI), and its 2016 Environmental and Social Framework (ESF), which was amended last year. In September 2020, the AIIB published the draft of a revised ESF, which the bank’s board is scheduled to approve next February following a public consultation period.

The PPI’s principles – including a “presumption in favor of disclosure” – are welcome, but insufficient. The policy includes so many exceptions that decisions about which documents the AIIB discloses ultimately reside with its president.

The current ESF (2016) includes two paragraphs on information disclosure. They do not mention essential time frames for the public release of documents, such as environmental and social impact assessments. Instead, the ESF calls for documents to be made available in a “timely” manner or, “as soon as they become available.” Such loopholes clearly allow financial or corporate interests to outweigh the public’s interest in learning of environmental and social risks ahead of time.

The Office of the United Nations High Commissioner for Human Rights and the AIIB’s European shareholders had called on the bank to adopt clear rules on the time-bound public disclosure of environmental studies and other relevant documents. The AIIB responded by using language and terminology that are carefully tailored to Western sensibilities. But upon closer reading, this content often turns out to be shallow and imprecise.

The proposed framework is also strikingly weak in addressing the growing trend of channeling investments through financial intermediaries such as commercial banks and private-equity funds. Even when these entities finance high-risk activities with AIIB support, they are not required to publish specific information regarding environmental and social impact.

To prevent and alleviate harm, the AIIB should ensure full disclosure of environmental and social impact assessments, including plans for land acquisition and resettlement, prior to project approval, when there is still a chance to influence the outcome. But the ESF review draft demonstrates the bank’s intention to delegate the responsibility for accountability to its future clients.

Unless the draft undergoes fundamental changes, we will miss a critical opportunity to promote transparent governance, fairness, and environmental sustainability in AIIB projects. The broader risk is that the bank’s approach encourages weaker environmental and social standards across the board as international financial institutions compete for investment opportunities.

The climate emergency and irreversible biodiversity loss have reached critical levels, while the political space for civil-society organizations in many countries is shrinking or has disappeared entirely. The AIIB’s lack of transparency threatens to make a bad situation worse.

This article was published first on boell.de, from www.project-syndicate.org.

The Asian Infrastructure Investment Bank (AIIB) is a multilateral bank for infrastructure financing and plans to become the leading global institution for financing infrastructure projects. The study from autumn 2020 analyses why binding rules on transparency at the AIIB, especially with regard to its environmental and social standards, are very important.

Read also the related article, showing why the bank must intensify its efforts to inform the public in a timely manner about the environmental and social risks of its projects. 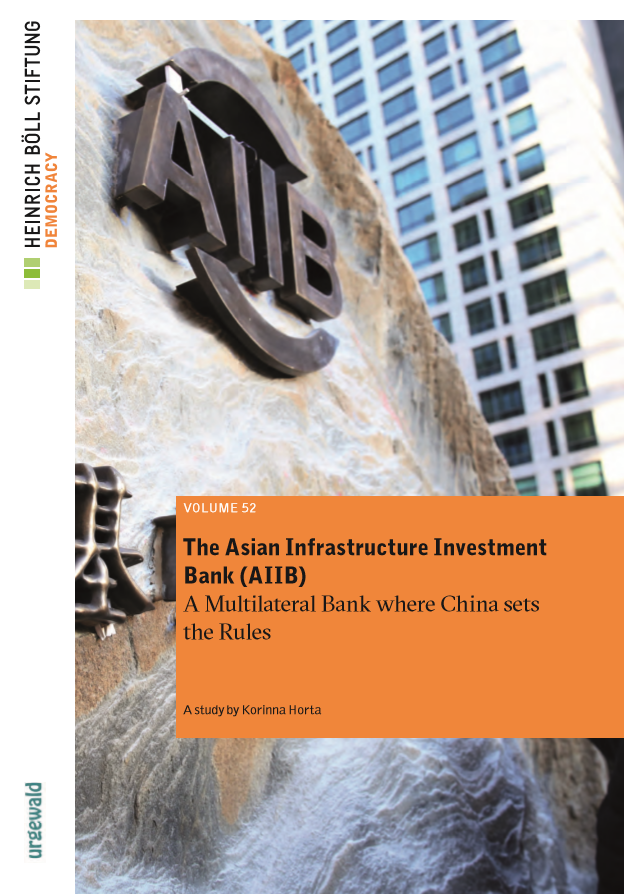 In the last years, a number of countries decided to join the Asia Infrastructure Investment Bank (AIIB), which has developed into a major player in the global financial architecture in record time. Korinna Horta's analysis of the situation regarding the respective standards after three years of AIIB in operation is very sobering.