A debate on the US-influence, Covid-19, restricted individual freedoms and the question how the EU should define its role.

In response to the coronavirus pandemic, there are strict entry conditions at the EU external borders. How do you think we can go back to a situation that enables those seeking protection in the EU to actually make it here? How can the conditions be addressed in a way to give people protection and asylum once again?

Lina Khatib: Even before the coronavirus crisis, one of the EU’s main concerns when it comes to the Middle East in general was the people arriving from that region as refugees and this had a huge impact on the way the EU was dealing with the region and the way governments across Europe were handling domestic policies. The crisis should be used as an opportunity to think about social protection policies across the board since it has exposed inequalities in Europe and migrants happen to be a sub-set of that the community. So now is a good time for European countries to look at their policies in general and reflect on whether they contribute to having effective and viable social protections.

It’s nice to hear that you are hopeful that now is time to do this. Hannah, as a politician you have been very active in advocating for refugee issues. How realistic do you think this kind of change is, and what needs to be done to get there?

Hannah Neumann: At the moment, things haven’t gotten easier because of the crisis. Almost no one can enter the EU, unless on business grounds. This situation shows once more that we need to find ways for people to make their asylum claim without crossing the border. That is the political challenge we are facing.

Looking at the countries many refugees come from, in the past decade many people have protested for their civil rights, and were met with oppression and violent responses. Hannah, do you have the impression that the coronavirus crisis comes as an additional layer of repression for people in the Middle East trying to secure rights in their own countries?

Hannah Neumann: It is clear that individual freedoms need to be restricted to fight the health emergency. But these restrictions need to be proportionate, and time-limited. And people need to be able to debate them. This is not always the case in the Middle East and some rulers misuse the pandemic for additional repression, indeed. But I think we need to look at it country by country, because the region is very diverse. In a number of countries, like Egypt or Turkey, we see restrictions that are disproportionate and that are not time-bound and where we really need to be cautious that the pandemic is not being used as a pretext just to reduce political freedoms. In some countries, we are not even speaking of shrinking space for civil society anymore, but of no space at all. And we also need to look at the economic situation. It’s completely different to have a lockdown in countries like Germany or the UK, where people can buy food and toilet paper and can store it in their homes, or in other countries, where being stuck at home for one or two days means you starve because you don’t earn the money you need to buy food. That puts pressure on people to infringe lockdown regulations, and if then the lockdown is being enforced with violence, as we have seen it e.g. in Iraq, people have to fear for their lives either way.

Dr Hannah Neumann is the Peace and Human Rights Coordinator for the Greens / EFA Group, Vice-Chair of the Human Rights Committee (DROI), Member the committees of the Foreign Affairs (AFET), Security and Defense Policy (SEDE) and Chair of the Delegation for Relations to the Arabian Peninsula (DARP).

Hannah Neumann studied and received her PhD in media sciences and peace and conflict research in Ilmenau, Berlin, Manila and Monrovia.

Lina, do you have any examples in mind where you can clearly say civil freedoms are restricted and potentially might remain like that? Or do you think people are using their power in a meaningful way?

Lina Khatib: The coronavirus crisis has played out in different ways in the region, and in a place like Tunisia, civil society has played a very important role in helping at the local level, especially in peripheral regions. However, in a place like Lebanon, the government announced an extension of the measures and it caused general mobilisation, which is basically the emergency measures taken under the umbrella of limiting the spread of the coronavirus in the country. A lot of civil society actors see this as a political measure because the general mobilisation rules prevent people from gathering in large numbers. The coronavirus pandemic in Lebanon came on top of a very severe economic crisis. People who were reliant on daily labour lost their livelihoods as a result of this economic crisis and the country’s very weak social protection measures meant that these people had no recourse to any public support. Civil society actors are saying this move is now not a public health issue but a political issue on the part of the government, and so we are seeing this crisis often play into the hands of autocrats across the region using it as an opportunity to crack down on freedom of expression. We’re seeing this crisis unfortunately play out in a kind of negative way in most places in the region.

True, we will have to see what comes out of it, but let’s take a step back and look at the broader picture of EU policy towards the Middle East and North African region. Sometimes the EU has been speaking with one voice, and sometimes different Member States have different approaches to states depending on their relationships. Lina, would you say that it would be better for the region if the EU spoke with one voice?

Lina Khatib: I think it’s highly important for the EU to speak with one voice even though it’s becoming increasingly difficult. Add to that the fact that many European countries are very much concerned with their internal and regional issues in Europe and within their own borders so that policy towards the Middle East is not a priority for them. The last time the EU developed a comprehensive strategy towards the Middle East was 1993. So, there is a huge gap when it comes to EU policies meant at harmonising a European position. The lack of coherence within the EU has obviously had a huge impact on European leverage when it comes to key issues in the region. Germany is as guilty as France and the UK and taking a very soft stance towards many autocrats in the region. All of this is very much at odds with the EU’s own principles when it comes to human rights at the very least. 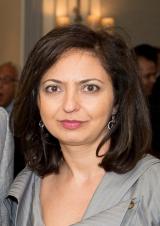 Dr Lina Khatib is the Director of the Middle East and North Africa Programme at Chatham House. Her policy interests focus on the international relations of and regional dynamics in the Middle East, as well as on the Syrian conflict.

Hannah, are you afraid that if we now try and develop a common strategy inside the EU towards the Middle East that it might be less favourable than older approaches?

Hannah Neumann: If the EU manages to speak with one voice, it has an impact, because then it’s not just the EU and the EU institutions, but it is 27 Member States that dispose of a lot of economic pressure, and that way also a lot of diplomatic power. Libya is a good example for this: The Berlin Conference on Libya was supported by all Member States and it was somehow successful, but then everything fell apart again because some Member States did not stick to what they had agreed upon. They continued supporting opposing sides of the conflict. Another window of opportunity for the EU might be the question who will pay for the reconstruction of Syria and who is going to pay for the humanitarian aid, as Russia is not going to do it. That could be a bargaining chip for the EU. But the EU can only use this bargaining chip if all agree on what they want to bargain for.

At the moment, the US is sort of absent and with an unpredictable policy towards the Middle East, so I think that this is a new challenge for the EU. How do you think the EU can strengthen its own role independent of the US?

Hannah Neumann: I don’t think the US is absent, and that’s part of the problem: they act completely arbitrarily. So, what is the role of the EU? Many in the Middle East take the EU as a role model showing how people live together in peace again following conflicts and wars. That is something I think we can build upon. I think the EU is often perceived as placing importance on fair play, as a player with "convening power", which means a rather neutral actor who has the potential to bring together different countries in case of conflict. This can help in the region. And also, the Green Deal has some good potential for cooperation in the region, where most of the countries have signed the Paris Agreement. If we in Europe aim for climate neutrality by 2050, but everyone else around us continues as before, we have not solved the problem. I hope the new Commission will make the challenges of the MENA region a foreign policy priority.

Lina, what do you think? What can the EU do and how much does it matter that the US plays a different role now?

Lina Khatib: Since the Obama administration the US has been taking a step back when it comes to engagement in the Middle East and that was part of a wider shift in the US priorities so that by the time Trump came into power the Middle East was not a very hot issue for US foreign policy. The Middle East was reduced really to the issues of terrorism, oil and Israel. In all of these areas, the US has made things more difficult for the EU because many things, such as the US sanctions against Iran, are crippling the region, and thus further complicating the EU’s own ability to act independently. So, this inequality in the relationship between the EU and the US is having very visible impacts in the region but at the same time, we go back to the issue of lack of coherence because the EU is not coherent internally in formulating a strategy.

Thank you very much Lina and Hannah. It was such a rich discussion.

Conversation
How does the current pandemic influence multilateralism? Which role can the European Union play in shaping its future? A debate.
By Bastian Hermisson