Putin’s regime promotes a vision of Russia as a state of Eurasian civilisation. According to him multiculturalism is an integral part of the Russian identity. But the large Muslim population is considered as second-class Russian.

In recent years many policy papers, reports and articles have been published disclosing the Kremlin’s financial support of extreme right-wing parties in the EU as well as Putin’s propaganda presenting Russia as a defender of genuine European values (family, Christianity, nation) against the EU which has allegedly betrayed them in the name of liberal and cosmopolitan fantasies embodied in the idea of multiculturalism. However, the picture is considerably more complex and confusing, since at the same time Putin’s regime promotes a vision of Russia as a state of Eurasian civilisation (the third way between Europe and Asia) which according to the Russian president is based on… a genuine multiculturalism.

The vision of Eurasian Russia is intertwined with a decreasing affinity of Russian society with the EU and Europe. According to the Levada Centre, a respected Russian research centre, at the end of the 1990’s almost two-thirds of Russians supported the accession of Russia to the EU and slightly more than 15 % was against. Last year in the same poll 60 % of respondents rejected the idea and 25 % endorsed it. The attitude towards the EU correlates strongly with the civilisational identification of Russians. Just ten years ago, before Russia’s aggression against Georgia, more than half of all Russians perceived their country as a European state, whereas more than 30 % did not share this opinion. The Russians’ identification with Europe has increased recently, yet most of them do not perceive their country as European. Moreover, the great majority of Russians perceive Eurasia as a main point of reference for Russia. Indeed, the above-mentioned change of civilisational identity is not provoked only by the confrontation with the West but it also constitutes an outcome of a planned identity policy of the Kremlin which is intertwined with a geopolitical and civilisational integration project, namely the Eurasian Union.

Launching the process of Eurasian integration, Putin described it not in strictly economic terms but as ‘a project for the preservation of identity of peoples, of historical Eurasia in the new century and a new world … Eurasian integration is a chance for the former Soviet Union to become an independent centre of global development, rather than the periphery of Europe or Asia.’ Of course, Moscow is predestined to lead the project, because in Putin’s words: ‘Russia is a civilisation state.’ The Russian President explains that this civilisational model of state organisation is based on the fact that Russia ‘has always sought to flexibly accommodate the ethnic and religious specificity of particular territories, ensuring diversity in unity.’ The Kremlin presents Russia as a multi-cultural paradise in contrast to the EU, where multiculturalism allegedly failed. Putin believes that ‘In Europe and some other countries so-called multiculturalism is in many respects a transplanted, artificial model that is now being questioned, for understandable reasons.’ In Putin’s opinion Russia is a completely different case, since multiculturalism is an integral part of Russian DNA. Because of that Russia succeeded in building a real multicultural society. Of course, President Putin does not see any problem in supporting the far right in the EU, a far right, which perceives multiculturalism in any form as an eternal enemy. Much more important is that the reality of the political and social life in Russia undermines that rosy picture of Russia as a thriving multi-kulti society.

Russia has the biggest Muslim population in Europe, both in absolute numbers and proportionally (share of population), particularly taking into consideration immigrants from Central Asia (mostly Uzbekistan, Tajikistan, Kyrgyzstan) and Azerbaijan. According to Russian statistical data, around eight million Muslim labour immigrants from the former Soviet countries worked and lived in Russia in 2017. The number of the native population with Muslim background is almost two times bigger. In total, Muslims make up around 15 % of the population in Russia, and their share is even bigger in the European part of the country. Because of higher fertility rates and a higher average life expectancy compared to ethnic Russians, the share of Muslims in Russia’s population will increase substantially. Despite the fact, that – because of the aging of Russian society - a massive labour immigration has become a structural feature of Russia’s economy, the Kremlin is very reluctant to provide immigrants with Russian citizenship or permanent residency. For instance, in 2017 more than four million Uzbeks, the largest immigrant community, resided in Russia, but only 70 thousand had permanent residency status. In recent years, only 20 thousand Uzbeks per year have received Russian citizenship.

There is an enormous discrepancy between the official rhetoric of the Kremlin presenting Russia as a successful case of multi-culturalism and the presence of Muslims in the inner circle of the ruling elite. Among the highest echelon of the presidential administration (66 officials), only one Muslim can be found. In the new government none of the ministers (32 posts) belongs to one of Russia’s Muslim nations. Through its aggressive and neo-imperial foreign policy Russia has become in recent years a substantially more securitised and militarised country. The state structures have been captured by siloviki, people from security agencies and the military establishment. They play, behind the scenes, a crucial role in Russia’s political and economic life. Meanwhile, Russian Muslims are greatly underrepresented in the officer corps of the Russian Armed Forces and intelligence services.

There is not a single general of Muslim background occupying the post of commander of one of the armed forces’ five branches. Neither does a Muslim command any of the five military districts. Generals of Muslim background serve in the general staff, but they only lead two rather insignificant departments. Last but not least, there is not a single Muslim in the ranks of leadership of the Federal Security Service (FSB).  In the Russian political system, parliament is not more than a façade, but even in this institution the authorities do not try to undertake affirmative action for representatives of the Muslim population. None of the eight deputy heads of the State Duma has a Muslim background. In case of about 25 parliamentary committees only one (on nationalities) is headed by a Muslim. In many EU member countries, where according to Putin multiculturalism failed completely, the proportional representation of Muslims in state elites looks substantially better than in Russia.

The Russian Muslim community is very diverse. According to opinion polls, Muslims from the North Caucasus, especially from the Eastern part of the region are substantially more religious, traditional and conservative than their co-religionists from the Volga region. The Volga Tatars are relatively better represented in elites on the central level. For instance, Elvira Nabiullina is the head of the Central Bank of Russia. However, the North Caucasus is Russia’s Achilles heel, having to cope with widespread unemployment, the highest fertility rates, rampant corruption and particularly repressive local authorities. The challenges facing the region are structural and of long term. The five poorest federal republics of the Russian Federation are located in the North Caucasus and inhabited mostly by Muslims. The pace of GDP growth per capita in these republics is below the country’s average. For instance, Ingushetia, the poorest Russian republic is more than ten times less rich than Moscow and the gap is rising. This wrecked state of affairs creates favourable conditions for the development of religious extremism among young people. It should be acknowledged that the conflict with radical Islamists in the North Caucasus has transformed in recent years from a fully-fledged guerrilla war to terrorist random attacks. The death toll decreased from more than 1700 in 2010 to 175 in 2017. Nevertheless, the number of victims of conflict in the North Caucasus was last year - proportionally to the size of the population - eight times higher than the number of casualties of Islamist terrorist attacks in the EU. Moreover, pretty soon Russia - even to a larger degree than many EU Member States - may be forced to deal with a return of at least some of its citizens and immigrants residing previously on its territory, who are currently fighting in the ranks of radical Islamist armed organisations in the Middle East. It is worth recalling that foreign fighters from the post-Soviet states account for around 20 % of all foreign fighters in Syria and Iraq distinguishing themselves by their military skills and esprit de corps.

Taking into consideration that Russia is sliding towards hard authoritarianism, its multiculturalism becomes more and more elusive. A political system based on a siege-mentality requires a closing of ranks against - invented -  external and internal enemies closely cooperating. In fact, ethnic and religious internal conflicts with global dimensions are officially recognised by the Kremlin as the main threats to Russia’s security. In President Putin’s words, Russia ‘must and will resist these destructive tendencies. It is the social and spiritual unity of our people which will play the key role in this.  It is based on an awareness of the citizens of Russia that they, people of different nationalities living in a common country, share common values and traditions, the great Russian culture and the Russian language.’ This statement shows that a vision of a Russia dominated by Russian language and culture, a vision which is rooted in its past, has still a huge impact on the Russian present. I will come back to this in my next blog post. 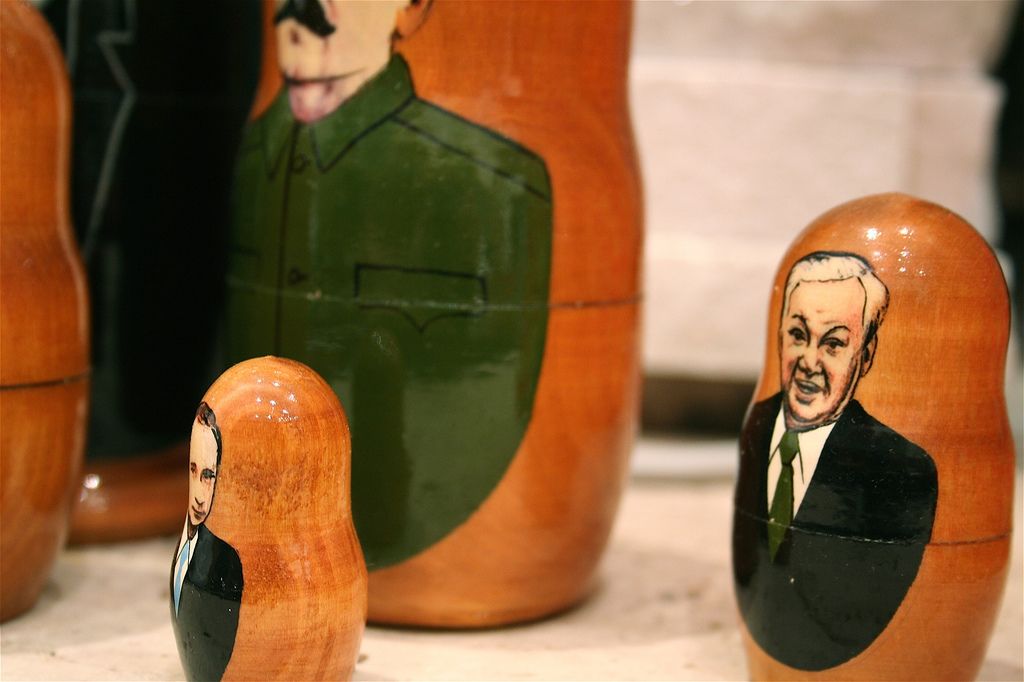 Beyond the 2018 Presidential Election: Is Russia Preparing for Life after Putin?

On 18 March, the Russians went to the ballot boxes to elect a new president. There was not the slightest doubt about Putin’s re-election. But whilst Putin is settling in for another six years, the question emerges what will happen in 2024

Hannah Arendt would have found a lot to dislike about today’s Russia. But she would have loved Pussy Riot. An excerpt from the lecture of Ralf Fücks upon the occasion of the 2014 Hannah Arendt Prize.
By Ralf Fücks