GERMANY/FARM STRUCTURES - Whosoever Hath, to Him Shall Be Given

One by one, Germany’s farms are dying off. For many, that is a worrying trend. But to fight it, society must agree on what the future of agriculture should look like.

In 2017, Germany had an estimated 270,000 farm enterprises, averaging around 60 hectares each, and employing a total of 940,000 people. One in every two farms was run as a sideline: the majority of the household’s income came from activities other than agriculture. But these averages conceal huge differences from one region to another, determined by the local landscape and environment, as well as by history, economics and legal conditions.

Take eastern Germany as an example. This region covers 30 percent of Germany’s total area but has just one-tenth of its farms. Eastern farms are far larger on average than their western counterparts – 224 hectares in the east as compared to 47 hectares in the west. They are also much more likely to be registered as limited companies, cooperatives or publicly traded firms: 15 percent have such a status, compared to just 0.7 percent in the west. Big arable farms are especially common in the eastern states of Mecklenburg-Western Pomerania and Saxony-Anhalt. They employ relatively few workers, typically 1.2 and 1.4 workers per 100 hectares.

Farms in southern Germany are much smaller, keep fewer animals and grow specialist crops such as grapes or fruit. They also need a larger workforce. The Rhineland-Palatinate employs 4.7 workers for every 100 hectares land in its wine and vegetable industries. The northern states of Lower Saxony and North Rhine-Westphalia have strong concentrations of labour intensive pig and poultry production.
Agriculture in Germany is undergoing a radical change. Ever fewer farms are managing ever larger areas and ever more livestock. The capital requirements are increasing, there are fewer permanent employees, and more workers are paid by the hour. Since the mid-1990s the number of farm enterprises has fallen by 50 percent, and the number of workers has declined by one-third. With a capital investment of 536,000 euros per worker, as compared to 408,000, which is the average for the German economy, farming is clearly more capital-intensive. That shows a willingness to invest money in order to cut labour costs. While in eastern Germany big farms are the rule, in the west there are already 47 farms covering more than 1,000 hectares. Most of those are in Schleswig-Holstein and Lower Saxony.

The trend towards bigger farm sizes, greater specialization and intensification has many drivers. Often, no suitable successor can be found to take over the farm when the current incumbent retires. Advances in technology make consolidation both possible and necessary. Tough price competition rules markets, forcing losers to give up. Many Germans recognize these trends as a problem, but there is a shortage of policies that stop or at least limit them. One reason is the Common Agricultural Policy, which adheres to a support model that gives priority to area premiums while imposing very few conditions on recipients.

In the current budget period (2014–20), Germany was allocated around 6.1 billion euros out of the Common Agricultural Policy pot. A small part of this, 1.3 billion, goes to agricultural and other actors to support the economy and environment in rural areas. The biggest part, around 4.8 billion euros, is paid directly to farm enterprises, mostly in proportion to the area each farm manages. That works out at around 280 euros per hectare per year.

Two states have the biggest agricultural areas, giving them the biggest slices of this pie: 976 million euros for Bavaria and 775 million for Lower Saxony. The five eastern states (outside the city-state of Berlin) together get around 1.5 billion euros. Payments to individual farms depend mainly on the size of those enterprises. In 2016, around 20 percent of the direct payments went to the largest 1 percent. 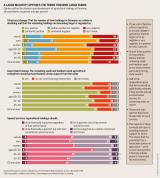 Scientists and civil society in German strongly criticizewhich enterprises really need them, and that they are not tied to any benefit to society. Despite this, the German government still refuses to make use of its room for manoeuvre within the constraints of EU policy. It could reallocate up to 15 percent of the direct payments to give farmers incentives to work towards environmental and climate goals. It in fact uses just 4.5 percent of the funds in this way. It could also allocate up to 30 percent of national direct payments to smaller enterprises. The current figure is 7 percent.

Germany could, if it wants to, start to realign its agricultural sector. But such a change of course is impossible, not because the Common Agricultural Policy restricts the possibilities, but because of a lack of political will, defective objective- setting, and successful lobbying by those who profit from the status quo.

The current proposals of the European Commission for the post-2020 Common Agricultural Policy would make it possible to set a maximum amount of area payments for a particular holding – but would also continue to legitimize and fix the direct payments. To achieve a sustainable structure for farming in Germany, society must first decide on what it wants from its agricultural sector.

Article
The transition from communism to a free market has resulted in both pluses and minuses for Polish farms. Incomes have risen, especially for large farms. But young people are leaving, industrial farms have appeared, small farms are going under, and the income gap among farmers has widened.
By Zbigniew Karaczun