Europe needs a new political majority for a fundamental reform of the EU’s damaging and inequitable farming subsidies to stand a chance of saving nature, preventing the worst effects of climate change and reviving small farms and our rural regions.

The ‘Agriculture Atlas 2019’ is a unique publication of facts and figures on the EU’s Common Agricultural Policy (CAP) published by the Heinrich-Böll-Stiftung, Friends of the Earth Europe and BirdLife Europe.

The ‘Agriculture Atlas 2019’ shows that:

'Today’s farming policy is highly inefficient, ineffective, and inequitable. Agriculture affects all citizens and not only farmers. EU farming policy shapes our rural areas, our nature and the food on our plates. Instead of mainly supporting the biggest, agro-industrial players the CAP needs specific instruments and targets which coherently support sustainable farms, which are the ones that manage to link healthy food, care for the environment and employment and thus better perspectives for our European regions. The Common Agricultural Policy needs to be taken as an opportunity to unite the European continent by deconcentrating and spreading fair and equal subsidies throughout all our regions, enhance thus social cohesion, provide the rural population with long-term development perspectives and reinforce the positive perception of Europe.’

All three organisations demand that, in order to justify continued use of taxpayers' money on the CAP, the financial budget - currently of nearly 60 Billion Euros per year - is shaped in a way which re-gains people´s trust in the European project. Current proposals of the EU Commission and the opinion of the outgoing Agricultural Committee in the European Parliament for the new CAP after 2020 disregard the environmental and social potential of the CAP by far.

Stanka Becheva, campaigner for Friends of the Earth Europe said:

‘Small-scale, family farmers are under threat like never before. With our natural world and the climate on the verge of breakdown, the EU needs to do everything it can to support these farmers who farm with nature, and stop subsidising dangerous industrial agriculture which leads to farming without farmers. We all need to get out and vote in this month's European elections for candidates who will build a better Europe and a safer, more sustainable food and farming system.’

‘Agriculture policy is currently held captive by the intensive farming lobby. Farmers will be the first hit by the looming environmental collapse. With the European Elections in a few weeks, citizens have a golden opportunity to vote for protecting nature, and by extension a more viable future for the farming sector in the long-term.’

The EP elections 2019 are a testing ground - not only for delivering EU long-term strategy for climate - but also for a more efficient and socially fair budget, which puts the environment and citizens first. A radical change in the Common Agricultural Policy is crucial to fulfil EU Paris climate commitments, prevent the dangerous consequences of environmental degradation and revive rural life in Europe!

The EU 2030 Climate and Energy Framework: What is at Stake for the Global Climate

Commentary
How will the EU’s 2030 decisions influence the global fight against climate change.
By Silvia Brugger 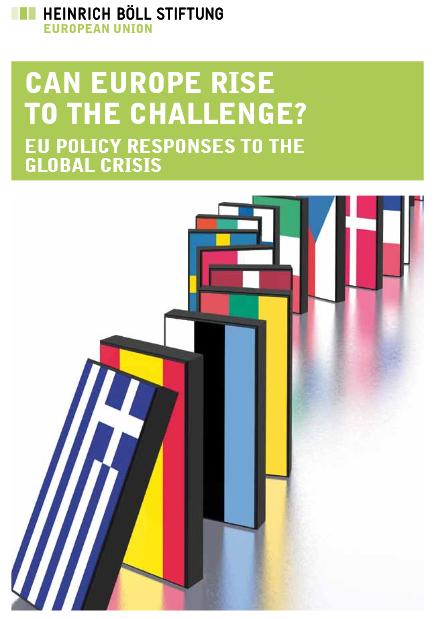 Can Europe rise to the Challenge? EU Policy Responses to the Global Crisis

There are crises and crises. Some come and go without leaving any lasting trace but others signal a break with the past. You do not need to be much of a prophet to predict that the current global economic shock will go down in the history books as the end of an era.

Article
Agroecology is a successful concept which promotes farming methods that are attuned to local ecosystems. It is already used for growing rice worldwide.
By Jan Urhahn and Christine Pohl