In the wake of the Lukashenko regime’s aircraft diversion: “We must draw red lines and defend them consistently”

Eva van de Rakt, Director of the Heinrich-Böll-Stiftung European Union office in Brussels, was in conversation with MEP Viola von Cramon-Taubadel (Greens/EFA Group) about the Ryanair plane forced by the Lukashenko regime to land in Belarus and the lessons the EU must learn from this.

Eva van de Rakt: On 23 May 2021, the Lukashenko regime forced a Ryanair plane en route from Athens to Vilnius carrying more than 100 passengers to perform an emergency landing, in order to arrest the dissident journalist Roman Protasevich. This is an unprecedented and shocking incident that can only be described as air piracy and state terrorism. In your view, what does it tell us?

Viola von Cramon-Taubadel: Lukashenko has now been in power for almost 27 years and is used to doing whatever he wants without consequences. He knows very well how to exploit our weaknesses to his own advantage and undermine the EU’s credibility. This latest terrorist attack was a further attempt to get up to his “old tricks” again. This time, fortunately, the EU seems to be more united than ever and prepared to penalise Lukashenko’s regime for diverting an EU aircraft and endangering the lives of its passengers, who were mostly EU citizens. Lukashenko wants to show us that there are no red lines and if there are, he can step over them at will. It is now vital that we show him that the opposite is the case and make sure that Lukashenko’s serious crime is punished commensurately.

At the EU special meeting, which took place in Brussels on 24 and 25 May, the European Council agreed on sanctions and measures against the Belarusian regime. Many observers praised the speed of the unanimous EU response. How would you assess the reaction of the EU Member States and the measures agreed upon? Will they be enough to force Lukashenko to give in?

It is excellent news that the European Council has finally begun to sanction the Lukashenko regime actively and, hopefully, effectively. Unfortunately, this decision was far too long in the making and in the meantime, the regime has claimed more victims. Vitold Ashurak, one of the many political prisoners in the country, recently died in a Belarus prison. If we had acted earlier and more decisively, we may have been able to save his life. And tragically, Vitold is not the first victim of this inhumane regime– and he will not be the last.

We have been hearing for months about the fourth round of sanctions against Belarusian officials. Unfortunately, it has taken an act of state terrorism to finally get a new list of sanctions into place. It is now a matter of devising sanction measures that will impact upon Lukashenko and his power apparatus.

What do the sanctions and measures mean for the Belarusian citizens, particularly the democratic opposition?

Viola von Cramon-Taubadel: This point unquestionably puts us on the horns of a dilemma: we need to find ways of hitting Lukashenko’s regime where it hurts without punishing the ordinary people of Belarus and putting the opposition movement under even greater pressure. The Belarusians are already suffering enough under this brutal regime and so, targeted personal measures against Lukashenko’s entourage are incredibly important. If they are properly implemented, they will strip these people and their families of all opportunities to enter the EU, to use their homes and apartments here, and for their children to attend private schools in the EU.

Unfortunately, these personal sanctions have been applied unevenly up to now. There are reports of various Belarusian officials who have succeeded in circumnavigating the sanctions through active lobbying in certain EU capitals. This needs to stop. Additionally, sectorial sanctions directed at certain sectors of industry, which prop up Lukashenko’s regime financially, can be an effective way of singling out the power apparatus with comparatively few negative effects for the population as a whole. The EU is already openly targeting the Belarusian potassium industry, which is an important source of foreign currency. And we are told that proposed sanctions against other sectors of the economy will be following in short order. 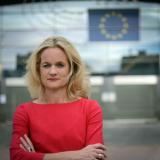 It is a terrifying prospect for dissidents who have fled to the EU to escape the violent state brutality and repression of totalitarian regimes if they can no longer be sure that they will reach their destination unscathed when travelling between two EU capitals. What lessons must be EU learn from this?

We must make absolutely certain that Lukashenko understands beyond any doubt that there is no such thing as “business as usual” for a despot like him, who is clinging onto power illegitimately, and that he will never be recognised as a representative of Belarus. Hijacking an EU aeroplane and abducting EU citizens in order to arrest dissidents is unacceptable, highly criminal and has caused irreparable damage.

The EU must now protect its airspace against further criminal acts of this kind and therefore declare Belarus a no-fly zone. This may provide a certain sense of security. But we must also step up our support for journalists and independent media, the pro-democracy movement and civil society in Belarus and particularly for the very many activists who have been forced to continue their fight for democracy from other countries, notably here in the EU. The EU must create specific programmes of support in this area.

As a consequence, the EU must offer protection not only to its own citizens, but also to politically persecuted individuals resident in the EU. It must defend the rights of those seeking protection with all its resources.

Roman Protasevich obviously has been forced to record a video confession. Lukashenko describes him as a terrorist who planned a bloody attack along with his accomplices. His parents and friends believe that he has suffered torture. What do you see as the options to help and protect Roman Protasevich? What can and should the EU be doing in this context?

The number of political prisoners in Belarus passed the 400 mark a long time ago and unfortunately, the resources we have to help them are limited. In a dictatorship in which there is no rule of law, any trial is a farce with a predetermined outcome. Even so, we must continue to fight, inside and outside the Belarusian courts, to provide moral, legal and financial support to the political prisoners and their families.

The state disinformation machine is running at full speed in Belarus. Lukashenko claimed that the report of a bomb threat originated in Switzerland, which the Swiss immediately denied. You are a member of the European Parliament’s Special Committee on Foreign Interference in all Democratic Processes in the European Union, including Disinformation. How can the EU tackle disinformation campaigns flaunted in their faces by authoritarian regimes acting without respect, thereby threatening the safety of their own citizens?

Lukashenko has decades of experience in disinformation. We have recently seen, however, that his methods are no longer quite as effective as they once were. They have also grown predictable and quite ludicrous. A classic example is the so-called “Mike and Nick” dialogue or the fact that they are now trying to pin the forced landing on Hamas. Since the stolen presidential elections, the Kremlin has actually sent its own propaganda experts to Minsk, to get Lukashenko into the position to be able to implement the latest disinformation techniques in Belarus. To counter disinformation of this kind, we need to support independent journalists, news portals and activists that offer fact-based information and, more importantly, are active online. The fact that Lukashenko resorted to a terrorist act to arrest Roman Protasevich just shows how scared he is of NEXTA and other independent news sources.

The Russian Foreign Ministry has described the EU’s reaction as verging on hysteria. How do you see the role of Kremlin?

It comes as no surprise that Russia is continuing to use Lukashenko and Belarus as leverage to wring concessions out of the West. Nor is it exactly astonishing that the Kremlin’s reaction shows once again that protecting the freedom of opinion and other universal fundamental rights and freedoms is not the basis for its political actions.

What can the EU do to stop this from happening again?

The best way of preventing this kind of thing in the future is for the EU to show more resilience and to act consistently and as a bloc. At the moment, we are hearing different messages not only from Brussels, but also from other capitals. This emboldens Lukashenko and his criminal gangs to go further down this road. If we could just draw red lines at some point and defend them consistently, then he will come to understand that crossing these red lines will have serious consequences.

Viola, thank you for the interview.

The original version of this interview was published in German on 28 May 2021, on boell.de.

More arrests and repression in Belarus

Statement
Further arrests and acts of repression in Belarus: Lawyer Maxim Snak arrested; Nobel Prize for Literature winner Svetlana Alexievich harassed – Pressure on Minsk and Moscow must be raised and activists in danger allowed into Germany.
By Dr. Ellen Ueberschär

Conversation
Expectations for the German EU-Council Presidency on EU-Enlargement in the Western Balkans. From previous disappointments and disorganisation to the desire for stability and peace in the region.
By Walter Kaufmann