COVID-19: What will be the impact on gender inequality in Senegal?

On 2 March 2020, Senegal reported its first case of coronavirus. This new form of COVID-19 has spread around the globe, with the declaration of a pandemic by the World Health Organization (WHO) on 11 March. The public health crisis is wreaking havoc upon all social and economic aspects of people’s lives in every corner of the world, including a notable impact on gender inequality.

Broadly speaking, the social, economic, and health consequences of the outbreak do indeed fall more heavily upon women than on men.

In Senegal, women make up the majority of health care workers in all positions. They account for 53% of the total labour force (Source: Audit genre MSAS, 2015). Consequently, women are more exposed to risk in the face of the pandemic, not only in their capacity as health care personnel but also as family members supporting their relatives at home. Most of them have children and act as carers for their relatives.

With the adoption of the lockdown and restriction measures, the weight of responsibility for the family (disproportionate even in normal times) tends to rest with the woman. Women therefore shoulder a considerable burden (UN News, 2020).

Following the announcement of school, university and kindergarten closures in Senegal for three weeks starting on Monday, 16 March 2020, with a view to slowing down the spread of Covid-19 (editor’s note: the closures are extended until 4 May 2020 following an official statement on 2 April 2020), new obstacles now hamper women’s ability to find gainful employment.

Lessons learned from other relatively recent outbreaks such as Ebola show that in times of crisis, resources from emergency services (children’s education and food, for example) are diverted elsewhere than to women, even though the pressure upon them to support the family continues to mount as their income dwindles. [1]

Like most men, the majority of women in Senegal work in the informal sector, which means that their income remains insecure, while they enjoy little or often no health insurance coverage at all. Nevertheless, the economic consequences of the pandemic will have a greater impact on women because more of them hold informal, unstable, and low-income jobs. Disruptions, including travel restrictions, are likely to prevent both men and women from earning a living and meeting the basic needs of their families, as witnessed during the Ebola crisis. 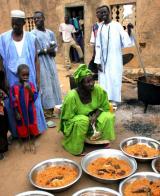 Because of their pivotal role within the family, women, to a greater extent than their male counterparts, bear the brunt of measures taken to prevent the spread of the disease.

Since they make up the bulk of domestic workers, women and girls are confronted on a daily basis with a stark choice, namely income or health. Some employers in Senegal, as in Europe, choose to temporarily lay off domestic workers (ILO, 2020). Such measures, associated with the extremely low wages paid in this sector, could drag domestic workers even further below the poverty line.

This goes right to the heart of the matter when it comes to gender inequality.

Inequality between genders is not only a moral and social emergency but also a vital economic challenge. Discrimination based on gender continues to prevent huge numbers of women from moving forward and our world is the lesser for it.

Countries where women are treated on an equal footing with men in the economic and social fields report better economic growth. The world’s GDP could increase by up to $28 trillion (i.e. 26%) by 2025 if women played an identical role in the economy as that of men (McKinsey). [2] This highlights the importance of the issue, as there cannot actually be any sustainable development without gender equality.

Even so, the pandemic may significantly undermine efforts made by countries such as Senegal to foster gender equality as an important step towards achieving their Sustainable Development Goals (SDGs).

Among the 1.5 billion people living on $1 a day (or less), most of them are women. The gap between men and women caught up in the poverty trap has widened steadily in the past decade.

The notion of « feminisation of poverty » was coined to designate this phenomenon. [3]  The new COVID-19 could intensify the feminisation of poverty, which, in turn, could hamper female participation in the labour market and exacerbate inequality in terms of access to and use of resources. In effect, women caught up in the poverty trap are denied access to those resources and services that would help them break free. Their access to education and support is inadequate; their involvement in the decision-making process within their household and the community at large is minimal. [4]

In spite of the powerful political rhetoric in favour of equality between men and women and regardless of a solid legal framework, inequality between men and women is very much an unresolved issue, especially against the background of the COVID-19 outbreak where, compared to men, women continue to dedicate a larger portion of their time to household chores and to bringing up children because of the gender-based distribution of tasks. Moreover, women account for 70% of those in poverty worldwide. [5]

On average, women earn slightly more than 50% of what men earn. [6] The current health emergency with its catastrophic economic consequences and no immediate end in sight could further jeopardize their livelihoods.

The article has first been published on sn.boell.org in French.

Commentary
With only three day notice, South Africa went into full lockdown on the night from 26 to 27 March. What happened in the three days leading up the lockdown is highly impressive. Instead of everyone following the instinct of making provision for themselves, neighbourhood solidarity networks sprang up spontaneously.
By Katrin Seidel

Dossier
All contributions by the Heinrich Böll Foundation on the political impacts of the Covid-19 pandemic. An international overview.

Digitalisation and the coronavirus in Morocco: From care to control?

Background
With a series of digital measures introduced in response to the coronavirus pandemic, Morocco is creating a trade-off between ways to provide rapid support and the parallel development of digital control.
By Bauke Baumann and Anja Hoffmann