The idea of regional cooperation can fill the ambition gap between national energy strategies and a standardized EU-wide approach.

In times of rising populism, internal cleavages and climate scepticism across EU Member States, Europe needs to reconnect with its citizens. Uniting the continent and re-gaining people´s trust in the European integration has never been more relevant. In fact, building a European Renewable Energy Union with regions, cities, municipalities and indeed citizens at its core could be the vehicle to realize this goal. The idea of regional cooperation can fill the ambition gap between national energy strategies and a standardized EU-wide approach. For MEP Claude Turmes, rapporteur of EU´s renewable energy governance reform, the direction is clear: “We are stronger together. [..) Can we think of a more positive project than local energy citizens?” And Brendan Devlin from DG Energy in the European Commission adds “We now see that individuals and communities are the actors that can bring us to meet the Paris Agreement goals”.

So, what is needed to put words into action? In a policy debate on cross-border cooperation for renewable energy, organized by the Heinrich Boell Foundation EU and the World Future Council, hosted by the European Committee of the Regions, about 50 policy makers and key energy stakeholders concluded that EU legislation must foster regional cooperation on the sub-national level. While the “Clean Energy Package for All Europeans” only supports member states to collaborate on renewable energy development and to interconnect the transmission grid across borders, municipalities and regions lack political support.

The project “Smart Energy Union Emmen Haren” (SEREH), which aims at building a regional, decentralized and mostly community-owned cross-border energy system, is a living example of the untapped potential that micro-level cooperation can unlock in accelerating the pace of energy transition in Europe. It is also illustrative of the current regulatory and legal barriers that local and regional pioneers are facing on the ground. “The current regulation is based on centralized systems that work top-down, while we need a distributed system that works bottom-up”, says Melinda Loonstra from the Dutch municipality Emmen. Emmen and its German neighbour Haren want to build a cross-border interconnection between their local renewable energy markets to become carbon neutral. “This link can help to build up a robust, reliable and affordable energy supply based on renewable sources in the Netherlands and Germany.” A direct exchange of electricity between the two regions could be the first step to another type of electricity market – a market where communities and small producers can trade their own energy via a digital platform. This micro-level form of cooperation could bring various advantages for European citizens: community-owned energy sources, keeping revenues in the region, reducing transport costs through local production and use, more affordable energy and the emergence of new businesses. One of the biggest challenges that Emmen and Haren are facing is conflicting national regulation on interconnection. And according to European law, only the Transmission System Operator (TSO) is permitted to transport electricity across border on the high-voltage grid. Also, legislative proposals that are currently discussed in the European parliament do not allow local DSOs to build interconnections on the medium-voltage grid between two countries.

According to Roberto Zangrandi, Secretary General of EDSO for Smart Grids, contradicting and diverse regulatory frameworks are indeed the biggest impediments to a rapid evolution of local networks. Depending on the respective national policies, the autonomy of the DSOs varies from country to country. In addition, the different support schemes, permitting procedures and administrative rules on the two sides of the borders also pose significant obstacles to the cross-border interaction between neighbouring regions or municipalities. Despite the possibilities for European funding of cross-border projects, these funds are in most of the cases considered out of reach for local actors, mostly due to co-financing and the complexity of application and reporting.

However, it is exactly these local actors that catalyse change. As Jan Carsten Gjerløw from the Akershus County Council, Norway highlighted in the policy debate: “I think citizens and regions are actually the most important drivers. And we will see that governments and law, they will come after, they will follow up.” The City of Oslo has improved air quality standards, which has been the driving force behind the development of new national low carbon solutions in the transport sector. Also Susanne Nies, Corporate Affairs Manager with ENTSO-E underlines that local actors are at the frontline of innovation. “TSOs, regulators and national governments work in a triangle. The local level has to push this triangle.” Meanwhile, Magdalena Jaworska-Dużyńska from the Polish city Karlino highlighted that it is not only the big cities but also the small towns and municipalities that need political support. “People in Karlino want to be green and do more than the national government. But for this, we need Europe´s support.”

According to Claude Turmes, there should be an obligation to incorporate multi-level governance dialogue in the current legislation. The concrete proposal in the new governance regulation aims at establishing a permanent multi-level energy dialogue platform gathering among others regional and local authorities, civil society actors, business communities and investors to discuss different energy scenarios and shape the development of national energy and climate plans is a step in the right direction. It is now essential that Member States will institutionalize this dialogue in the legislative framework.

A very concrete and in fact promising tool to support local actors especially in border regions is the European Grouping of Territorial Cooperation (EGTC). This tool has been designed to facilitate cross-border, trans-national or interregional cooperation in any sector. Regarding renewable energy, the EGTC can provide subnational frontrunner regions with regulatory support and flexibility to adopt a specific framework of rules and regulation in a specific cross-border territory. By creating one single legal entity to attract funding for cross-border areas, the tool will not be dependent on political changes at national level and could bring benefits directly to local communities without the need to involve national governments. This could simplify the complex and cumbersome administrative procedures and enable local and regional actors to develop long-term strategies in the context of a more stable regulatory environment. “The sky is the limit with this EGTC tool”, comments Slaven Klobučar from the European Committee of the Regions.

Aiming to strengthen territorial cohesion during its Presidency, the Luxembourg government launched further proposals for improving this legal tool that would allow cooperating cross-border regions to set up their own set of fitted legislation for a specific area or project. In this way, two municipal entities on both sides of the border could negotiate a specific regional legislative agreement that could be reviewed and approved by the national states before it becomes binding. While it would not deprive Member States from sovereignty, it will give possibilities to regions to “pull legislation from one side of the border to the other” and become “living laboratories”. The improved tool could also provide legal certainty to bottom-up initiatives, ensure better control of the outcomes, accelerate the adoption of new rules and promote cross-border experimentation zones. The next step in the process is the implementation of this tool. “The ball really lies with the Commission”, explains Frederick Richters from the Government of Luxembourg. In order to bring these concrete suggestions to fruition, the Commission has to turn them into a legislative proposal, for example, through incorporating them into the EU cohesion policy package.

One of Luxembourg´s supporters in this process is Alexandra Lafont from Mission Opérationelle Transfrontalière. “Often people do not even know which people to speak to on the other side of the border. This is why they need platforms and institutions", she points out in the policy dialogue in Brussels. In fact, in a Europe that is close to its citizens, EU institutions should be seen not only as a regulator but rather as an enabler that brings together various actors at different levels, promotes an interactive exchange through an institutionalized dialogue and facilitates access to financing for small towns and municipalities and community-owned projects. “Europe is more than legislation", says Brendan Devlin from DG Energy in the European Commission. “Even though it will be difficult to move from a regulator towards an enabler of policy outcomes, this is what we need.”

To watch the recording of the full policy debate that took place on 6th June 2017 in the Committee of the Regions in Brussels, please click here. You can also find some photos here.

Key insights and policy recommendations for decisionmakers on local, national and European level from a study tour to the North Sea region.
By Kathrin Glastra and Anna Leidreiter 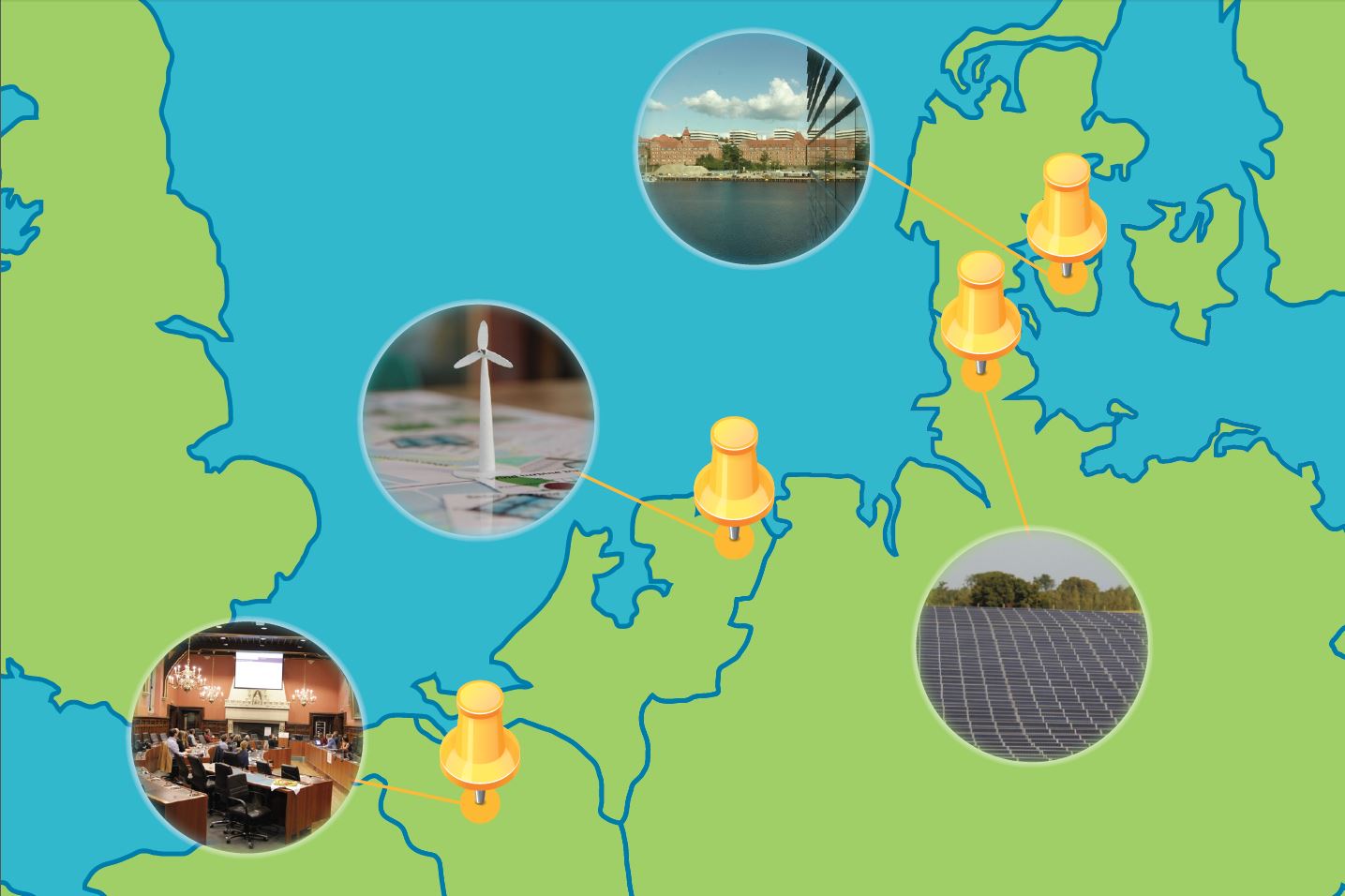 Key insights and policy recommendations for decisionmakers on local, national and European level from a study tour to the North Sea region. 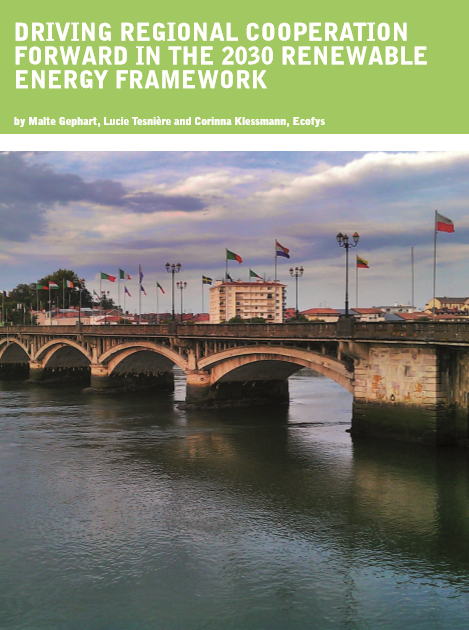 How can regional cooperation be strengthened within the 2030 governance and how can it help to reach and even exceed the binding EU target of at least 27% renewable energy by 2030?