Why EU Institutions Need an Upgrade

Does the European Union need a constitution to become more democratic? Can a European constitution help the institutions gain legitimacy and acceptance among Member States and their citizens?

The EU institutions are suffering from a lack of legitimacy and acceptance. Reform proposals are booming from strengthening the EU institutions up to creating an EU republic with a sovereign statehood on the one hand and on the other hand some support to revert to the single market. But it seems wiser to further develop the political union which has been achieved and to determine deficits efficiently.
The EU earns its legitimacy substantially from the Member states and thus through the Council. In addition, legitimacy is further backed by the European Parliament since it grounds on free and secret elections of the European citizens.

The blame all goes to the European Commission (EC) and the European Court of Justice (ECJ). The Commission is not the fruit of elections and according to the regulations of European treaties it is supposed to be the “treaties’ guardian”. Together with the ECJ, the Commission is however deepening the EU’s competencies without any preliminary democratic decision making process.

The ECJ is furthermore taking advantage of the fact that the EU is not based on a constitution. It happens though that the treaties have been subject to a constitutionalisation in the past. European treaties, and especially the Maastricht and Lisbon treaties, are handled as if they were a constitution which enables ECJ to pursue its attempts of enlarging EU’s field of action.

ECJ’s legal practices enhance moreover a regulatory gap:  whilst national law can potentially be trespassed  easily, legislation on European level has to face important hurdles. Another questionable circumstance which contributes to the imbalance of European legislation is the following: The European Charta of Fundamental Rights contains more fundamental rights than national constitutions. However in the ECJ jurisdiction economic rights prevail over individual and social rights. This kind of legal practice stands in contradiction to an ecological and social definition of the European Union.

In comparison to most of the national constitutions, the treaties are very extensive and detailed. In 1963 and 1964, the ECJ decided through ground-breaking judgments that EU law is instantly applicable and suspends national law in the event of a collision. Consequently, the European Union is interfering widely with the regulatory competence of Nation States.

Altogether it becomes clear that the “unfinished” structure of the European Union enhances problems in the attribution of areas of responsibilities on the ground of a deficient democratic deliberation process. The Commission is furthermore acting like a government even though EC is only appointed and can only be expulsed by the Parliament as a whole.

Dieter Grimm, a former German constitutional judge, has recently elaborated a couple of suggestions in order to redress these grievances, to make EU competencies more effective and simultaneously to politically strengthen European policy without weakening the sovereignty of Member States:

2.    The European Union urgently needs to improve its ability to act whereas, at the same time, the subsidiarity principle must not be neglected in order to respect the sovereignty of Member states.  To do so, competencies have to be assigned according to expertise similar to a federal system in which competencies are linked to the environment where the most appropriate administration is possible.

3.    Finally the growing/escalated constitutionalisation of treaties has to come to an end which means introducing a lean constitution for the EU. Constitutions should not be subject to daily political deliberation but are the fundaments of political debates. In practice, most treaties, especially the one on the Functioning of the European Union (TFEU), should be converted into secondary EU legislation.

The last two proposals will hardly have the chance to be implemented. The second proposal limits the transfer of competencies while offering a pragmatic structure to the collaboration between Member states and the EU. The third proposal does not require a change in treaties neither whereas it supports the political Union which is being criticised. However, if the European Union aims to remedy to its erosion which questions its legitimacy and acceptance, the Europeans must face the matter. 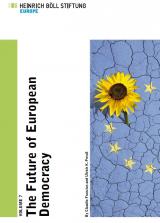 The Future of European Democracy

The study fleshes out a number of proposals to put the EU on a more stable and democratic footing and examines the futre of the European democracy as a whole.

A heart for Europe

In his new book A Heart for Europe. The Case for Europatriotism, Dick Pels postulates a new Europatriotism in times of doubt and uncertainty. Politicians and intellectuals should take responsibility of charismatic and visionary leadership to oppose the politics of fear by rising nationalist movements.
By Dick Pels