The sociopolitical requirements of a potential democratic transition in Hungary

Analysis
What might be done with Hungarian Prime Minister Viktor Orbán’s political system after a potential opposition victory in 2022, considering that it is built mostly on informal power and privatized economic-financial resources? These questions are currently being debated mainly as issues of public law. Unfortunately, little is being said about the sociopolitical requirements for the democratic transition the opposition so desires.
By Róbert László

Commentary
Amidst the Covid-19 pandemic, the government-sponsored disinformation engine is operating at full capacity in Hungary, scapegoating and intimidating critical voices and triggering death threats against academics and intellectuals.
By Anna Frenyó

What to make of Hungary’s budget veto?

Analysis
Hungary and Poland indicated in November that they would veto the European Union’s Multiannual Financial Framework (MFF) for 2021-2027 and the Next Generation EU (NGEU) economic recovery fund. However, recent developments indicate that Hungary’s and Poland’s views on the matter have diverged. What does Budapest stand to gain by using its veto?
By Patrik Szicherle

Democracy is out of order: CEU forced to leave Hungary

Analysis
The Central European University (CEU) announced that it is forced to launch all degree programs in a new location in Vienna in September 2019. The Hungarian Government has made it impossible for the university to ensure its operations in Budapest on the long run.
By Gabi Gőbl

The Vote on the Sargentini Report: Good News for Europe, Bad News for Orbán, no News for Hungary

Blog
The Sargentini report showed divisions between Eastern and Western European countries as well as between left and right wing tendencies. It also evidenced that illiberal policies have to face political consequences at European level. Other governments such as Slovakia, Bulgaria and Romania, though, make less a public display of their illiberal steps.
By Péter Krekó

Interview
On 12 September the European Parliament voted in favour of starting procedures against the Hungarian government for breaching European values. We asked Hungarian MEP Benedek Jávor how he evaluates the outcomes of the vote.
By Zsófia Deák and Benedek Jávor

How to Encourage Illiberals: the Orbán-Merkel Meeting

Blog
Orbán openly threatens the EPP and uses the topic of migration as a pretext to gain credit and form new alliances in the EU. He also continues buidling an illiberal state passing a legal and constitutional package which is deadly for democratic institutions. However ignoring Orban only creates a huge wave of democratic backsliding in the EU.
By Péter Krekó

The name Visegrad in Western European terminology has become synonymous with a lack of solidarity and nationalist politics. In Hungary, however, it also has implications for the future of democracy in Western Europe. How can the EU recover its appeal?
By Eva van de Rakt 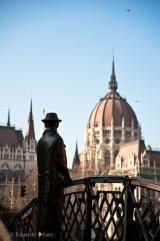 Authoritarian rules in Hungary and Poland and corruption and criminality in Slovakia and the Czech Republic make Eastern Europe a problem child. What are the reasons behind the worrying developments and what are the main differences and similarities between political trends in Central Eastern and Western Europe?

Hungary: a Foreign Policy Stress-Test Case for NATO and the European Union?

Blog
The foreign policy of the new Orbán government is rather 'obstructionist' than constructive. Orbán aims to create a sphere of influence on the Western Balkans and together with Poland form an Eastern block against the central European power. He is also inclined to make frequent use of it's veto right towards the EU.
By Péter Krekó