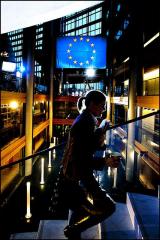 What Is at Stake in the 2019 European Election?

The upcoming European election in 2019 might bring about an unprecedented political earthquake, already foreshadowed four years ago, blowing away the political centre altogether. What is likely to happen in the end: the feared come-back of nationalism or is there hope for a pro-European revival?

The Role of the European Union in Current Global Conflicts

How can the EU deal with global conflicts? With the European Union Global Strategy (EUGS) of 2016, the EU has presented its latest foreign policy approach, including security policy and its role in conflicts. But what does it mean in practice?

Six Months to Go! What Can We Do to Restore People’s Faith in the European Project?

Six months before the election to the European Parliament in May 2019, the prospects are bleak. If politicians can show that they are willing to respond to the real needs of the people and are able to connect local issues with the European level, there might still be hope for the European elections.

In June 2018, the transformation of the political system from a parliamentary to a presidential one has become effective. The Turkish Parliament has been weakened and the political hierarchy with the President as the highest standing has been further strenghtened. But suspending accession talks would also suspend European support for more democracy.

Are Things Getting Better in the Eurozone?

The grand coalition which had governed Germany for four years suffered serious losses in the parliamentary election of 24 September 2017. Finally, almost five long months later, the outcome is a new grand coalition between CDU and SPD. While for Germany a new edition of the grand coalition might mean more of the same and could lead to more frustration among the voters and a growth of right-wing populism, what does it mean for a European Union ?

The European Union at the Beginning of 2018: Still Alive, but Can It Kick Hard Enough Under Pressure?

2017 was another bad year for the European Union even though it should have been celebrated a year of celebration 60 years after the signing of the Treaty of Rome. Many of the serious problems Europe had been wrestling with over the last years remained unsolved.

The First Round of the French Presidential Election – And the Winner Is?

After the Dutch parliamentary election, it was the French voters’ turn to decide on the political direction their country will take. A look into the deciding issues during the election campaign

What are the Main Challenges Facing the European Union in 2017?

2016 was the year the fissures in the structure of the EU became visible even for those who had preferred to ignore them. We asked three experts what the three most serious challenges are.

After the Brexit Referendum: Is the European Union Still Worth Fighting For?

After the ‘Leave’ vote in last June’s Brexit referendum, the European Union is shaking on its foundations. Our office invited young Europeans to debate about the Europe they want with EU veterans, Members of the European Parliament, EU experts from think tanks and representatives of civil society.