A region between development, destruction and climate protection

Since Jair Bolsonaro took up office as President of Brazil in January 2019, deforestation rates have curved steeply upwards once again. But it should be borne in mind that even under previous presidents, from Lula to Temer, and even with enormous global awareness of the importance of tropical forests and many national and international efforts, deforestation has never been halted altogether. This is why this publication by Thomas Fatheuer aims to investigate the background (and people behind the scenes) as well as the causes of deforestation. For the destruction of the rainforest and obliteration of areas where indigenous peoples and traditional communities live is the result of social and economic processes embedded in the country’s power structures. 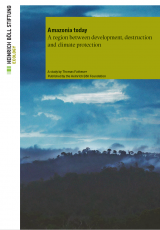 “All is not yet lost!” – A contemporary look at Amazonia

Commentary
The rain forest is going up in smoke – this is the impression given by the images that have been circling the globe for years. But the digital age means that they now travel faster than ever. There are fires in the Arctic, forests burning in Canada, Siberia, South East Asia and now in Amazonia. It is a cause for concern and incomprehension, as most people are now aware of the importance of the largest tropical forest on earth in climate change and protecting biodiversity.
By Barbara Unmüßig

How do we define Amazonia?

Commentary
Amazonia means many things to different people. Below is an overview of what Amazonia is, who lives here and why such large areas of it are being slashed and burned.
By Thomas Fatheuer

Analysis
Nowhere in Latin America are so many people killed by the police as in Brazil. But not everyone is equally affected by this. Society is divided between those people who “can be killed” and “good citizens”.
By Marilene de Paula

Photo series
Thousands of people live cheek by jowl in the Cruzada São Sebastião housing project. The coronavirus pandemic has hit them especially hard. Most of them were already living under tough economic conditions and now many of them have lost their jobs. The Afro-Brazilian population has been disproportionately affected by the virus, with racism and inequality thrown into even sharper relief by the pandemic. This is also the experience of the residents of Cruzada São Sebastião.

EU-Mercosur Agreement: With a Brazilian Democracy under Deconstruction?

Article
In the height of debate on the agreement that the EU negotiated - in theory - with Mercosur, Brazilian activists and professors brought their doubts on this matter all the way to Brussels, particularly regarding the quality of their country’s democracy.
By Mirra Banchón