Getting serious about enlargement perspectives - how else are we to respond to this war?

Simon Ilse: What has changed in European energy policy since the Russian war of aggression against Ukraine?

Dirk Buschle: Many things, but not the general direction. I think we have become used to seeing crises as opportunities, and Russsia's war in Ukraine is the biggest of all crises. It takes us back to the foundations of the European Union, namely to secure peace on the European continent. The European Commission rightly tries to turn this crisis into a boost for the existing energy transition policy. That policy had run into difficulties already before the war. In particular, the high energy prices have been, and are currently, affecting the EU Member States. Russia’s war in Ukraine has confirmed that the Green Deal policy is the mid- to long-term solution to this problem, and that its pace and level of ambition should even be increased. That is how I see the "REPower EU" initiative: we are staying on course,  and we have to get out of fossil fuels and into renewables even faster than before. And for the Green Deal there is now an additional narrative. This is relatively new for the EU, where the switch from fossil fuels to renewables has been motivated so far almost exclusively on the grounds of climate change and the greenhouse gas effect. Before, it was a classic green issue, which it still is, but now it is also a security issue.

So the war has made the European Commission more geopolitical?

Yes, and also the Green Deal — both are more pragmatic, almost American-style. In the US, the approach has long been that renewables are local, using them as a means for reducing our dependence.

The Energy Community has set up an Energy Support Fund for Ukraine; what are the main uses of the funds so far?

After the first hours of sitting in front of the screens in horror, and constantly on the phone making sure our staff in Ukraine was safe, we quickly asked ourselves what we could do practically to help. Our approach was to help matching the huge wave of willingness to help from companies and governments with the right counterparts on the Ukrainian side. Then it quickly became clear that many donors find it easier to provide monetary funds to be disbursed for urgency purchases directly to Ukrainian companies, for which a fiduciary is needed to provide a certain degree of security that the money will go to where it is really needed. This is the Ukraine Energy Support Fund. The most urgent needs may be spare parts and fuel, but also loans, in case of increasing liquidity problems. Without the necessary repairs to the electricity, gas or district heating networks, in particular, there will be massive problems in the winter. Strategically, we want to support the energy system’s resilience and  ensure that Ukrainian companies in the power and energy sector do not just disappear from the map, particular with regard to renewables, and can one day participate in the reconstruction.

The Energy Community brings the countries of the Western Balkans closer to the EU Energy Union. What opportunities are there in this new situation?

A truly fundamental crisis in the energy sector in the Western Balkans, even before the war, was the price crisis, which in some places also led to a state of emergency. Import-dependent countries such as North Macedonia, where lignite deposits are coming to a natural end, suffered particularly badly. The crisis revealed that no significant investments in the energy system have taken place in many countries for decades. The investment conditions have not been there, often because of lack of cost-reflectivity with regard to prices. Thus, the crisis now reveals the shortcomings in what I call the "first energy transition", namely the necessary transition from a post-socialist to a market-based energy system. What is positive is that the question of how the energy mix of the future should look like in these countries is becoming very concrete now, and is being taken seriously. The head-in-the-sand posture has come to an end. One reason for this is that the effects of inaction are no longer in the distant future, but within the election cycle. I am cautiously confident when I see many governments in the region now tackling their strategic energy and investment planning.

What caused the price crisis?

Mainly it was driven by the rising global price of gas and the increased demand in Asia as the economy recovered after the pandemic. But certainly the pre-war abusive behaviour of Russia and Gazprom pushed prices up as well. Underestimating that was naïve on all our parts. But it has also shown that on a global level, Europe is a "price taker", as are the Western Balkan countries. 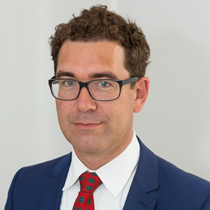 Dirk Buschle is Deputy Director of the Energy Community Secretariat since 2011 and has led its legal unit since 2007. In this position, he is in charge of ensuring implementation of European energy law in the countries of the Energy Community. He is also responsible for dispute resolution and negotiations and acts as mediator in high-profile investor-state conflicts in the energy sector. Prior to his current position, Dirk Buschle was Head of Cabinet of the President of the Court of Justice of the European Free Trade Association (EFTA) in Luxembourg.

Dirk Buschle graduated in law from Constance University, Germany, and earned his Ph.D. at St. Gallen University in Switzerland. He has widely published in different areas of European policy and law, has lectured at Universities of Reykjavik, Constance and St. Gallen as visiting professor. He is Professor and Chairholder of the European Energy Policy Chair at the College of Europe in Bruges.

Serbia, as the most important country in the Western Balkans, continues to pursue an "in-between" policy, as the recently announced visit of Lavrov and the subsequent visit of Chancellor Scholz have shown. What would an offer from the European side look like to reduce Serbia's gas dependence on Russia?

First of all, I think it is very good that Germany and Europe are getting more involved in the Balkans right now. Europe needs to be clear about where it wants to go with the Western Balkans. Laws and regulations are often being negotiated to the smallest technical detail, with the practical relevance of these negotiations for the accession process not always clear. This has affected credibility. Under these conditions, the reluctance to engage in major issues, such as the energy transition, may be a negotiation tactic; it should not be. Clarity about what we are prepared to offer would be important for the process. I think now is the time to get serious about our concrete vision. For Ukraine, as well as for the Western Balkans region. Keeping partners at a certain distance can create frustration, which the Energy Community cannot entirely absorb. Of course, this process will affect the EU itself, but this is the homework we have ahead of us: how do we design and build a new enlarged EU that works for us and our partners, and also continue to uphold our values and achieve our strategic goals? Getting more clarity would be an appropriate reaction to this terrible war in Europe.

Again, what might an offer to Serbia look like, for example? Something that Serbia could consider as a win?

I am quite convinced that placebos will not work. We should be clear about the perspective. This will allow us to formulate and communicate our expectations more clearly, including in sensitive areas such as the gas sector. It is difficult to accept, for instance, that gas companies refuse to grant access to their pipelines in contravention of European law, which affects competition and security in the region.

In terms of energy policy alignment, the Energy Community is already legally equivalent to EU membership to a large extent. The Western Balkan states are part of the internal energy market. This is a good model but cannot replace full membership in the mid-term. We should also not underestimate the help needed in the energy transition. In all Balkan countries, coal is coming to an end. New coal-fired power plants have become very unlikely. The issue now is to determine the energy mix for the future, and how to design the transition in the technically, economically and socially best possible way. This will also require massive investments, including from public sources, as well as our strong political engagement. In Serbia, for instance, the energy minister is a strong promoter of renewables, but the domestic conflicts are not easy. What I consider most important is to realize that not every country needs to be self-sufficient. Regionally integrated open energy markets can help solving many of the domestic problems. The Energy Community will work hard to achieve that, in particular throughout this year.

The EU now wants to introduce a carbon border adjustment mechanism (CBAM). Questions about the timetable and feasibility have been raised recently.

There are currently hurdles in relation to the Fit-for-55 package and an ETS extension could not be agreed. So it will take time, but the message is clear. Either the EU levies a CO2 price via border adjustment, or the Western Balkan states introduce their own CO2 prices. From the point of view of the Western Balkan states, it would of course be better for the income to remain in their own countries.

Finally, who are the Western Balkans frontrunners in the energy sector?

I leave the suspense for our upcoming Implementation Report!

Thank you very much for the interview.

The interview was conducted on 13 June 2022, at the Energy Community Secretariat in Vienna by Simon Ilse, former Director of Heinrich-Böll-Stiftung’s Belgrade office. It was first published in German on boell.de.

The lessons we must learn from EuroPride Belgrade

Commentary
The EuroPride 2022 fiasco shows us one thing: Serbia will not become part of the EU under President Aleksandar Vučić. The EU must face the cultural war in the Western Balkans head on, tackle disinformation and take Serbia’s EU accession seriously.
By Simon Ilse

A new day in Europe but not in Bulgaria!

Commentary
The EU–Western Balkans Leaders' Meeting concluded more as a win for Putin and his allies than for progressive forces in the Western Balkans. The European Council did not meet the challenge of the moment, writes Simon Ilse.
By Simon Ilse

30 years after the start of the war: a watershed moment for Bosnia and Herzegovina too?

Dossier
6 April 2022 marks the 30th anniversary of the outbreak of the Bosnian War - the first war in Europe after World War 2. The reality in Bosnia and Herzegovina to this day is a succession of increasingly severe crises. The current war of aggression on Ukraine fuels the risk of destabilisation. The EU must support civil society and progressive parties in the country instead of continuing to seek deals with secessionist forces that deepen ethnic divides, dismantle the state and put peace at risk. On the 30th anniversary after the start of the war, we bring together positions of Bosnian civil society on German and European policies.
By Heinrich-Böll-Stiftung