Jutta Paulus on COP26: “For leading by example, we must achieve our European Green Deal goals”

Jutta Paulus is a Member of the European Parliament for The Greens/EFA and is serving on the Committee on the Environment, Public Health and Food Safety. She has worked on many issues crucial for the achievement of the European Green Deal and currently debated at COP26, including methane emissions and the shipping sector. In the negotiations to form a so-called traffic light coalition following the 2021 German elections, Jutta is part of her party's delegation in the working group on environmental policy. Lisa Tostado asked about her expectations and initial assessment concerning this year’s COP as well as the role of the EU and particularly Germany in international climate negotiations.

Jutta Paulus: The introduction of the European Green Deal was Europe’s vision and path to a more sustainable and prosperous future. Since then, many strategies and legislative initiatives with concrete numbers on how to actually achieve the EU Green Deal followed. And here the problems can be found. For example: The new EU goal of reducing greenhouse gas emissions until 2030 by at least net 55 percent is not enough. To reach the Paris goals, we would actually need a reduction of 65 percent, and without taking into account sinks! Of course 55 is better than 40, but it is just not yet enough.

The EU is and must continue to be a global role model for reaching the Paris goals. It is a heavy weight in climate diplomacy because of its own commitments but also because of its support for third countries. The EU understood early on that success depends on bringing everyone on board. For leading by example we must of course take all necessary measures to achieve our European Green Deal goals. I see a lot of work here in the next two and a half years. But leading by example also means credibility. European Commission President Von der Leyen has promised to make the implementation of the Green Deal her top priority. She therefore has to make sure that Member States will not dilute its goals.

This year’s climate conference seems to have helped another important greenhouse gas to be further up on the agenda. On the second day of COP26, the EU and the US announced a Global Methane Pledge. It is a partnership by over 100 countries to limit emissions of this greenhouse gas by 30% by 2030 compares to 2020 levels. As the shadow rapporteur of the EU Methane Strategy in the European Parliament, you have fought for slashing methane for many months now. How do you assess the Global Methane Pledge? Will it spur long overdue action on this very potent greenhouse gas? What are your expectations now regarding the Methane Regulation the European Commission is going to propose in December?

Finally, methane gets the global, high-level attention it deserves. I welcome the Global Methane Pledge, but at this stage, it is a rather symbolic initiative, a memorandum of understanding. The United Nations Environmental Programme UNEP calculated that we could reduce methane by 45 percent until 2030 with measures that are available today which would reduce global warming by 0.3 degrees Celsius. We must take advantage of this potential. With the upcoming regulations, the EU can lead as an example and introduce real and binding measures for each sector. When the methane strategy was introduced one year ago, only the energy sector was targeted with concrete measures. Besides this, the proposal concentrated on the monitoring, revision and verification (MRV) of methane emissions. Data on emissions is important. However, counting emissions does not reduce them. I expect the European Commission to also propose binding measures for the agriculture and waste sectors and to include gas and oil imports by introducing a certification scheme for suppliers.

How do you asses other pledges which have come out of COP so far, be it on deforestation, exiting coal or ending finance for fossil fuels?

All these pledges at this year’s COP are very interesting. There seems to be pressure on states to come up with pledges and demonstrate global action. This is probably the last COP where we can limit global warming to 1.5 degrees Celsius. Of course, every state wants to look active and bring home some action.

These pledges must be regarded with caution though. They are parallel commitments outside the actual COP26 negotiations. It is good when like-minded states demonstrate their commitment for a certain climate issue, especially when it is unlikely that a similar commitment could be reached in the official negotiations. At the same time, we get fragmented, non-binding diplomatic texts instead of real action.

For example, the pledge to stop financing fossil fuels abroad only applies to new direct public support and only for unabated fossil fuels. The pledge on ending coal entails ending it in the 2030s and 2040s, with Poland, who signed the pledge, declaring itself as developing country and clarifying that it is not planning to phase out coal before 2049. 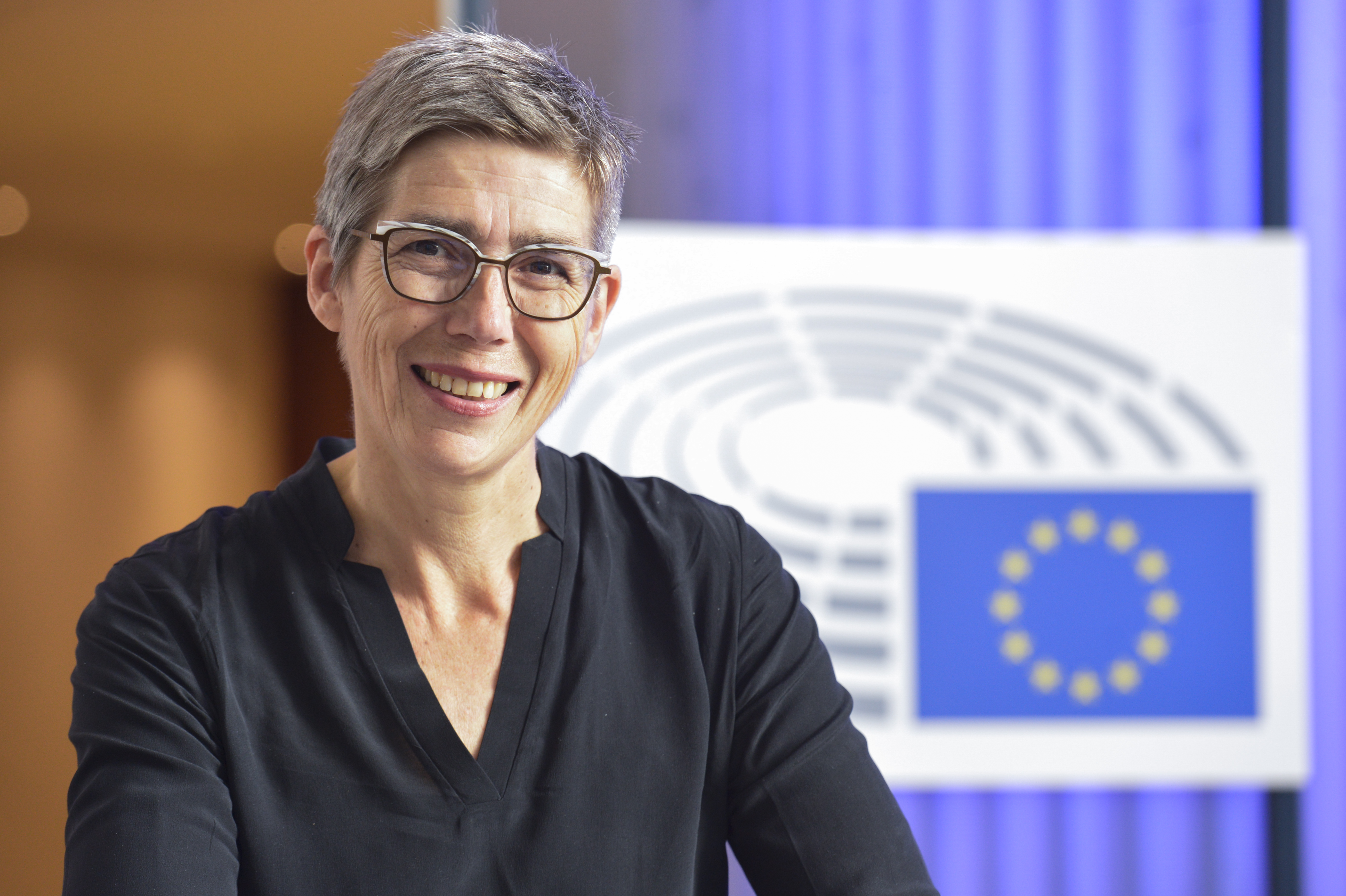 Jutta Paulus is a Member of the European Parliament for The Greens/EFA since 2019. She is a member of the committees on Environment, Public Health and Food Safety (ENVI), Industry, Research and Energy (ITRE) and Transport (TRAN). She is the rapporteur for the revision of the EU regulation for monitoring, reporting and verification of shipping emissions.

Paulus started her career as a pharmacist, co-founded an independent laboratory for the examination of chemical hazards, and worked in quality management. From 2017 to 2019, she was the regional co-president of the Rhineland-Palatinate Greens.

Jutta Paulus dedicated her political work to climate, energy and environmental challenges. She aims to achieve that the European Union takes effective action against climate change and that human beings, animals and nature are protected from destruction, pollution and poisoning.

The role of the shipping industry has become one of the topics of discussion. With around 90% of world trade transported by sea, global shipping accounts for about 3% of global CO2 emissions. Decarbonisation in aviation and shipping is harder than for on-land transport. You are an expert in that matter as the European Parliament’s rapporteur for the regulation on monitoring CO2 emissions from maritime transport. Led by Denmark, fourteen nations took issued the “Declaration on Zero Emission Shipping by 2050.” What could come out of COP26 for shipping? And again, is the EU leading in this regard?

Here, we have another nice looking pledge. However, in reality, I have been waiting for more than a year now for the start of negotiations with EU member states and the European Commission. I managed to get a huge majority behind my report on shipping emissions. We call for including methane and other greenhouse gases in the MRV (monitoring, verification, reporting of carbon dioxide emissions from maritime transport) system instead of only looking at CO2, we call for an efficiency target for the shipping sector, for the extension of ETS to international shipping and the creation of an Ocean Fund for shipping decarbonisation and biodiversity protection. All of this is frozen because the presidencies refuse to put the file on the agenda.

The EU does indeed try to induce progress at the level of the International Maritime Organization IMO. For example, the EU recently sent a letter to the IMO urging for global measures. But history shows that IMO starts moving only when regional measures are put into action. Therefore, we must lead by example and take the first steps by ourselves.

Biodiversity and nature restauration are also topics you have worked on. How to promote solutions that mitigate both global heating and biodiversity loss? Where do you see false solutions in this realm, which are promoted during COP, but also at the EU level?

It is not possible to separate climate from environmental policies. The EU will soon introduce a new Restauration Law, which I will be working on for the Greens/EFA. We must ensure to protect our species and nature and rebuild healthy habitats. With far reaching measures, the EU can lead by example at the Biodiversity COP15 next spring. As with climate, we need global action to stop the mass extinction. I do have concerns that nature-based solutions will be proposed which do not acknowledge human rights of people in the Global South. Indigenous people have been the guardians of healthy ecosystems, but are threatened to be driven off their homesteads. The industrialized countries must not shift the task of restoration to poorer countries but should do their work at home, restoring peatlands and wetlands and setting out wilderness areas.

Decarbonising the economy also needs a redirection of financial flows. Recent reports indicate that the European Union is moving closer to integrating nuclear power and natural gas in the bloc’s sustainable finance taxonomy. This set of rules is designed to provide investors with a common definition of what is green and what is not in order to channel more capital into sustainable businesses. What do you say to people who claim that the world needs nuclear power to avoid a climate breakdown? How do you see the current debate on the EU's taxonomy for sustainable finance in this regard?

Nuclear power will never be sustainable and every penny invested into this outdated technology is a penny less for real sustainable innovation, climate action and new jobs. Even if nuclear power was a safe technology, even if we knew how to handle our nuclear waste safely, even if the risk of proliferation of nuclear weapon material were not immanent, nuclear energy would still be too expensive and too inflexible. Additionally, nuclear reactors need years or even decades in construction. Too much delay for urgently needed climate action. Nuclear energy is no solution for our climate and energy demand and simply a stranded asset.

You were not able to attend COP26 yourself because you were called into the negotiation team for the next German coalition government. While I understand that you cannot say much about the content at this point, you have a good sense of what Europe expects from the new government in terms of climate policy. What are your hopes for Germany’s post-Merkel leadership, both on the global and the European environmental arena?

The EU will hardly be able to act as a global role model in climate action if Germany stays within the ranks of the foot-draggers. Germany has a very good image as climate actor which does not match the reality. For the sake of climate, environment and economy, but also credibility in Europe and beyond, Germany must speed up its energy transition significantly, fight for a European exit out of nuclear energy and reform all of its sectors to align them with the European Green Deal.

Thank you so much, Jutta, for having taken the time to provide us with your insights!

Conversation
How does the European Green Deal respond to the climate emergency? What are its strenghts and weaknesses? What main economic and political barriers have to be overcome to reach higher ambitions?
By Lisa Tostado