The issue of nuclear power has been with the European Union since the very beginning of the nuclear age. Where are operating nuclear power plants in the world? Who is building new reactors? What happened in the European region after Chernobyl and the Fall of the Berlin Wall?

This analysis is part of our dossier "Nuclear Power in Europe: 35 Years After the Chernobyl Disaster".

The issue of nuclear power has been with the European Union since the very beginning of the nuclear age. French and British scientists were involved in the Manhattan Project, the development of the first nuclear weapons in the United States, and were able to share their new scientific knowledge with their colleagues at home after the Second World War. France and Britain rapidly developed their own nuclear weapons programs, and many European countries had their own military nuclear ambitions including—quite surprisingly—countries like Belgium, Germany, Italy, Sweden and Switzerland.

The Euratom Treaty, signed in 1957, established the European Atomic Energy Community with the purpose of “the speedy establishment and growth of nuclear industries”. It did not go as fast and as successfully as imagined. But in 1979, while the United Kingdom had 33 operating units, there were only a total of 58 reactors connected to the grid in what today are the EU27 Member States. By the end of the 1980s the fleet reached already its historic all-time high with 136 units in operation (see Figure 1). Only 106—30 less than in 1989—were left as of the end of 2020, about one quarter of the world total, with more than half (56) operated in just one country, France, while the remaining 50 units are located in 12 other Member States. The vast majority of the plants, 87 units or over 80 percent, are located in seven of the western countries, and only 19 are operating in the six newer Member States.

The region has not seen any significant nuclear building-activity since the 1980s. While only 14 reactors were started up over the past 30 years, a total of 39 units ceased operation in the EU27, a net negative balance of 25 reactors. The decline of the industry has started decades ago.

Since the Chernobyl disaster started unfolding 35 years ago, there have been only four construction starts in the western part of the EU27, two of which are still under construction, Olkiluoto-3 in Finland since 2005 and Flamanville-3 in France since 2007. Only two reactors were connected to the EU27-grid over the past 20 years, both in Eastern Europe with one unit each in the Czech Republic and Romania, none since Cernavoda-2 started up in 2007. Two reactors are still under construction in Slovakia (Mochovce-3 and -4), where construction started in… 1985. Maybe the first one will finally be connected to the grid in 2021.

The Finnish and French construction sites were meant to be the industrial demonstration of superior technology and engineering capacities leading to the first European Pressurized Water Reactors (EPR) ever built. Olkiluoto-3 (OL3) was meant to start generating power in 2009, followed by Flamanville-3 (FL3) in 2012. Instead, the projects turned into an industrial disaster and a financial fiasco – EPR seems to stand for European Problem Reactor. The projects have encountered numerous technical issues, from concreting to welding, with repeated quality-control problems. The EPR development was originally triggered by the Chernobyl accident, but 35 years later not a single EPR is operating in Europe (two have started up in China). The EPR case is also illustrating the very long lead times in the industry.

OL3 is currently scheduled to begin electricity generation by the end of 2021, with a 12-year delay, 16 years after construction start. The Finnish government had counted on OL3 as a low-carbon power source and had to substitute by other means of power generation, electricity imports, or the purchase of certificates to meet its climate obligations.

FL3 will be connected to the grid in 2023, at the earliest, if ever. The builders are still struggling with conceptual issues, non-conformities in the fabrication of parts, and inappropriate execution of specific tasks. The French Court of Accounts has estimated that total project costs would reach €19 billion. However, that estimate did not take into account the latest series of mishaps. When the decision was made to build the plant, almost 20 years ago, it was supposed to cost €2.5 billion.

There are more or less credible “plans” for new nuclear plants, most of them in Eastern Europe.

The Czech government in 2020 signed a framework agreement with the national utility ČEZ to organize an international tender in order to have a decision by 2024 and start construction of two units at the Dukovany site in 2029. The potential role of Russian Rosatom is controversial. The Czech government has failed in earlier attempts to launch a new-build program. The outcome of this initiative is uncertain. In March 2021, Vaclav Bartuška, Special Envoy for Energy Security, recalled sarcastically that, as Government Envoy for Temelín [the other operating Czech nuclear plant site], he wrote in his final report to the government, he did “not believe in a nuclear project in a country that is unable to build a motorway network and high-speed train to Berlin or Munich”.[1] Reportedly, he nevertheless thinks the Dukovany project will go ahead.

In Hungary, after some 15 years of preparation, an application for a construction license for two new Russian designed reactors at the Paks site was submitted in June 2020. The project has raised significant controversy over the procedure under which the Russian contractor was chosen. In March 2021 a study published in the Journal of the Association of Hungarian Geophysicists questioned the earthquake safety of the site. At the same time, the Paks II project company has signed a contract with an engineering company to assess until the end of 2022 the conditions under which a construction license could be obtained. Some sources have suggested construction could already start in 2022. Considering the long history of delays of the project, a short-term construction start seems unlikely.

Poland has been contemplating the introduction of nuclear power since the 1970s and has started building two units in 1984, which were abandoned in 1990. No financing plan has yet been established, no technology, no sites chosen for “6–9 Gigawatt” of nuclear power by 2040. As earlier Polish plans, this one is not credible at this point.

As a consequence of the lack of construction, the average age of the EU’s nuclear fleet has been increasing constantly and stands now at over 35 years on average. The age distribution shows that the vast majority—89 of 106—of the EU’s nuclear reactors have been in operation for 31 years and beyond. The ageing atomic fission machines become increasingly unreliable. In Belgium, with seven units now the second largest fleet in the EU, the average real output in 2018 dropped to less than half of what would have been expected at nominal capacity. In fact, on an average 180 days the reactors did not generate power at all, not a single kilowatt-hour. The EU’s largest nuclear generator, France, has its own problems with maintenance outages that become impossible to forecast. In 2019, the country counted 5,580 reactor-days with zero production. That was 1,700 reactor-days with no output more than planned. In 2020, nuclear generation dropped by another 12 percent to a 27-year low. The world’s largest nuclear operator, the state-controlled Électricité de France (EDF), has lost control over outage durations.

In 2020, nuclear plants have generated just over 700 Terawatt-hours (billion kilowatt-hours or TWh) in the EU27, a spectacular drop of almost 80 TWh or 11 percent compared to the previous year, while all renewable energy technologies increased their output by a combined 80 TWh. At the same time, electricity consumption dropped by over 100 TWh, in particular due to the COVID-19 pandemic and fossil-fuel-based power plants reduced generation by over 110 TWh. As a consequence, for the first time the share of renewable power generation including hydro (39 percent) outperformed fossil fuels (36 percent) according to Eurostat estimates, which indicate that the carbon footprint of the power sector dropped by 14 percent. While the figures are not yet available, it is already certain that non-hydro renewables generated more power than nuclear plants in 2020. Less consumption, less fossil fuels, less nuclear, more renewables and lower emissions in the end. Remains to be seen whether proactive climate-protection policy will be able to make up for the effects of the global pandemic.

Where are operating nuclear power plants in the world? Who is building new reactors? How many units did China start up since the Fukushima disaster struck Japan in 2011? Where are EPRs in the world and what is their current status? Which company is operating/building reactors in the United Arab Emirates? When did construction start at the Hinkley Point C project in the United Kingdom? What happened in the European region after Chernobyl and the Fall of the Berlin Wall?

Now you can actually see it in a few clicks with the fully interactive tool on World Nuclear Power Reactors covering 70 years of nuclear history from 1951 to 2021.

With a primary focus on nuclear constructions, this project is meant to help understand the dynamic and visualize the state of the nuclear industry; it allows to dig from the broad view to single reactors.

The display of information is organized in four different graphical modules: a map and three time-charts that provide information on construction starts, grid connections or construction cancellations, and the cumulated number of reactors under construction by year. Each module serves as a filter: any selection from any of those elements is reflected on all the other parts of the dataviz, and can be further refined—you can cross-filter—to concentrate on specific points, time frames, to compare countries, technologies…

Those different levels of interactivity, and the variety of angles and filters, make it a unique exploration tool applied to nuclear power reactors worldwide. They allow to answer immediate and straightforward questions, but also trigger new approaches of their history.

The data visualization is based on the nuclear reactor database developed and maintained by the core team of the annual World Nuclear Industry Status Report (WNISR). 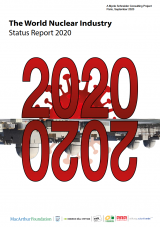