When the Taliban put a bounty on Afghan director Hassan Fazili’s head, he was forced to flee the country with his wife and two young daughters. He captured the family’s uncertain journey at first hand, documenting their harrowing trek across numerous borders.

The Heinrich Böll Foundation's European Union office in Brussels recently organised an online screening and after movie debate of the documentary "Midnight Traveler”. The film shows the three-year odyssey that Hassan Fazili, his wife Fatima, and their two daughters, Nargis and Zahra, carefully documented on video with their phones. “Midnight Traveler” follows their journey and highlights the family's strength of perseverance. Like thousands of others, Hassan Fazili and his family ended up in Europe seeking safety and a stable life. In this interview, which was conducted via email, director Hassan Fazili sheds light on their arduous journey and how “Midnight Traveler” was made.

Zora Siebert: What was it like to shoot an entire film on mobile phones?

Hassan Fazili: Making a film with mobile phones was both difficult and exciting for me and my family. As you know, the documentary "Midnight Traveler" was made with three mobile phones, but we did not have three phones at the same time. Sometimes our phones broke down and we did not have the money to repair them or buy a new one. Several times during the making of the film, I had to spend the money I had saved for my family's food on mobile phone repair. And sometimes we only had one phone that all our family members had to use for different things.

Sometimes our daughters watched animation movies on the mobile phone, they sometimes listened to music and sometimes played games on it. My wife kept in touch with her mother through the phone. Because my English was not good, I used the Google Translate app to talk to other people. Sometimes I would download and read pdf books on the phone. Most importantly, I used to make videos for my film with the phone, and I used to communicate with my friends and colleagues through it because of my film. The capabilities of a mobile camera are limited and I could not capture some scenes with the phone. But in the situation we were in, a mobile phone was the best option for making this documentary. A mobile phone was always available to me due to its small size, and I was able to turn on my phone camera and take videos quickly. Sometimes we were in dangerous situations and if anyone had found out that we were making a film, it would have been life-threatening. The most important feature of the mobile phone in that situation was that it didn’t attract attention and others did not notice me and my phone. Some people who saw my phone did not take me and my phone seriously.

"Midnight Traveler" shows suffering, but also a lot of private and happy family moments. Why did you focus the film on your family rather than migration in general?

Human feelings and emotions were important to me and I wanted the viewer to get acquainted with a part of real human life. In real life, sometimes people are afraid and worried, sometimes they are depressed and hopeless, sometimes they are calm and happy and hope for the future and strive to achieve their dreams.

I wanted our film to look from inside immigrants’ lives to the world outside their lives. As an immigrant filmmaker, I wanted to share details with the viewers that were less covered. I wanted the viewers to approach and empathise with our joys, sorrows, feelings, emotions and desires. I wanted the viewers to feel with our family during the film, to laugh and cry with us, to be homeless with us, to be immigrants and wanderers with us and not only to be our spectators. We made this film in very difficult conditions of migration, but I wanted the subject of migration to be in the margins of the film's story. I saw people who did not trust each other, they were afraid of each other, they were not kind to others, but they were fine with their family members and only trusted their own family. In this journey, all our strength was our family being together, so I wanted the focus of the film's story to be the family.

What was it like to film "Midnight Traveler" while at the same time experiencing this odyssey across Central Asia and Europe?

We had a very hard life during the making of this film and we gambled with our lives to make it. Our family was in a situation where I sometimes thought we might not reach our destination alive. I tried my best to take the best images and send them to my colleagues so that even if we did not make it, my colleagues could use the videos after our deaths and our voices would not be silenced. During filming, one of the hardest steps for me was sometimes getting caught between the duties of a director, a father, a husband and a head of a family. The more problems my family had, and the harder they were, the more beautiful my images became. In some scenes, I enjoyed making the video even while I was weeping with sadness behind the camera. Sometimes the whole family took refuge in me because of fear. In such a situation, I tried to be strong. But as a human being, I was also scared and did not know who to turn to. I was ashamed of myself, I hated myself, I hated the cinema, I wanted to break my phone camera and beat myself up. But this film was like a member of our family. We all tried to make it and it kept us hopeful. I sometimes told myself about the future of this film and its positive effects. Sometimes when we were in the forest for days and nights, we had no water or bread, no roof over our heads and we were in the cold and rain; on those days, I imagined that the making of the film was over and I was watching the film as part of the audience. I imagined the trees around us as people sitting in a hall and I imagined myself on the stage. I bowed to the trees and by doing so, I felt like I was bowing to the viewers. 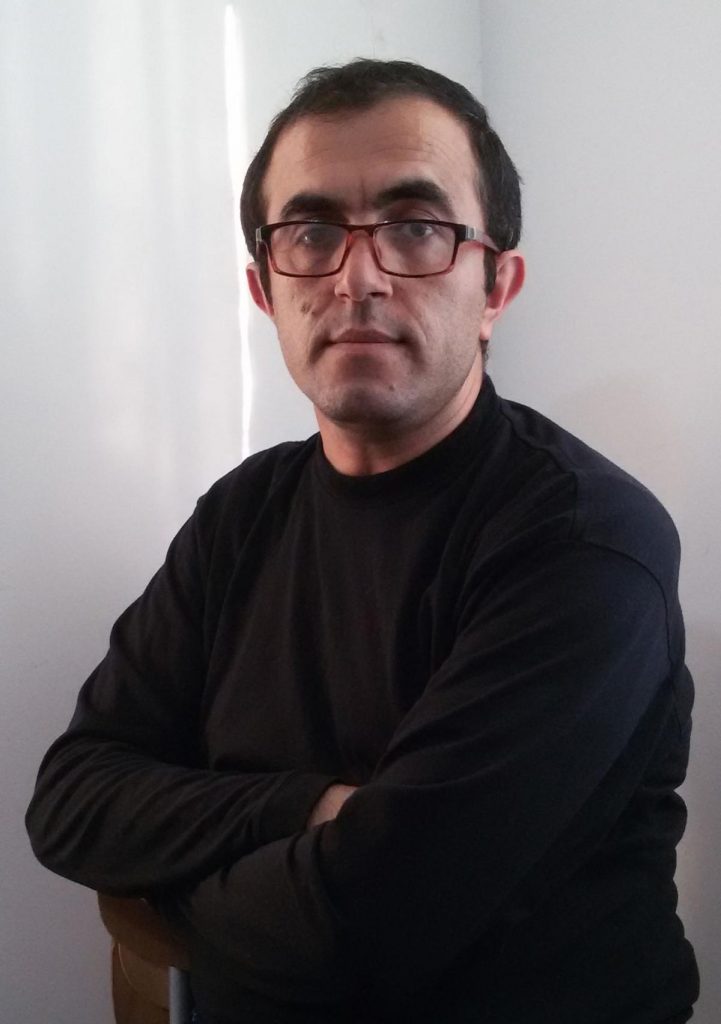 Hassan Fazili has directed and produced theatre plays, documentaries, short films and several popular television series in Afghanistan. In 2011, he was selected by the British Council to attend Sheffield/DocFest for documentary filmmaking networking and training. His films Mr. Fazili’s Wife and Life Again! both push the envelope on issues of women's, children's and disability rights in Afghanistan, and have won awards at numerous international festivals. He also worked as a Location Manager for Feo Aladag’s In Between Worlds, which premiered at Berlinale 2014, and as a Camera Operator for the IDFA selection Voice of a Nation: My Journey through Afghanistan. His documentary Peace in Afghanistan, made for national television, profiled Taliban commander Mullah Tur Jan, who laid down arms in favour of a peaceful civilian life.

The European Commission revealed the long-awaited “New Pact on Migration and Asylum” in September. What do you think should change in European refugee policy? What should be done better?

The most important reason for migration is war. I hope that the laws will be written in such a way that no war will ever be supported and human life moves towards peace.

Millions of people have been forced to flee their country because of war. Many of them have managed to reach a safe European country by making very dangerous journeys and thousands of people are forced to stay in Eastern European countries for long periods of time due to closed borders, and unfortunately, they are held in inhumane conditions in refugee camps. Basic facilities such as food and clothing that are distributed to them are very limited, and even these small amounts are humiliatingly thrown at immigrants. (Like when humans throw food at a herd of animals and sometimes even worse. In refugee camps – in Eastern European countries – immigrants are treated inhumanely.)

The facilities (food and clothing) which are provided for immigrants from different places (perhaps charities or other places) go to the camps in the name of immigrants, but I have witnessed that sometimes, due to corruption and lack of management by the camp officials, some of those facilities are sold in markets.

Many of the refugees have arrived in their destination country and are waiting for the asylum process. And among them, unfortunately, Afghan refugees are being persecuted by the authorities of their own country. My personal experience – and that of thousands of other immigrants – is that the Afghan government officials, who sometimes come to the EU, trade with European countries on the status of the immigrants. This trade leaves many Afghan refugees in limbo for a long time, and sometimes their asylum case is rejected, and they suffer from mental health problems and it even has a very bad effect on their children. The government of Afghanistan is known as one of the most corrupt governments in the world. The funds and facilities they receive from European countries are not used properly for immigrants who are deported to or returned to Afghanistan. Due to corruption and incompetence, the Afghan authorities are both causing insecurity for the people of Afghanistan and increasing the suffering of Afghan refugees in Europe.

I hope that the laws will be written in such a way that people do not have to risk their lives and the lives of their children because of immigration. Also, the laws should be such that the human dignity of immigrants is not become harmed due to corruption and lack of management by the officials of Eastern European countries.

How are you and your family now?

Our family is all good. These days we live in a small town in western Germany and we feel safe here. My daughters go to school, my wife and I are studying German. But our city is small and I have been unable to find work, and we have not yet been able to achieve a normal life. I'm trying to move to a bigger city like Berlin so I can continue my cinematic activities. But unfortunately, the strict rules that exist for immigrants have made it very difficult for me to go to a big city.

What are your upcoming projects?

My next project is a feature film. I have just completed the initial version of the screenplay and I'm rewriting it. I hope I can pull together the funding to make my film.

Thanks a lot for taking the time for this interview, Hassan. We wish you and your family all the best.

A Crisis of European Values

Interview
Zora Siebert talks to Markus Weinberg about his documentary "Mission Lifeline", confrontations with the right populist movement in Eastern Germany Pegida and current developments of the European migration policy.
By Zora Siebert

The EU Pact on Migration and Asylum

Dossier
After years of erratic and uncoordinated actions, the European Commission has revealed in September 2020 the long-awaited Pact on Migration and Asylum to “propose a fresh start” on this highly politicised policy priority. Will the "New Pact" become the coherent strategy on migration the EU needs?