Dossier
Worldwide we are witnessing the return to great power rivalry, and – as a reaction – the calls for strategic sovereignty of the European Union are gaining strength. But how can the EU navigate through a more competitive world and maintain its core values at the same time? These questions are at the core of Heinrich-Böll-Stiftung's 21st Foreign Policy Conference.

What to make of Hungary’s budget veto?

Analysis
Hungary and Poland indicated in November that they would veto the European Union’s Multiannual Financial Framework (MFF) for 2021-2027 and the Next Generation EU (NGEU) economic recovery fund. However, recent developments indicate that Hungary’s and Poland’s views on the matter have diverged. Hungary continues to risk delaying the arrival of new EU subsidies that would allow the Government to make new spending commitments in the last full year before the 2022 general election. Yet, considering the current politico-economic situation in the EU, Hungary does stand a chance of achieving some of its immediate goals. So, the key question is: What does Budapest stand to gain by using its veto? 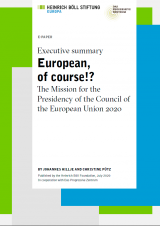 On July 1, 2020, Germany will once again serve as chair of the Council of the European Union since its previous turn thirteen years ago. It thus stands to follow that European politics have become a renewed focus of public debate in the country. Such discussions are continually characterized by the question of the nature of Germany’s responsibility in the European Union. 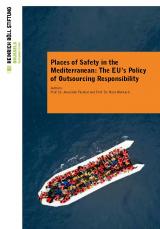 Places of Safety in the Mediterranean: The EU’s Policy of Outsourcing Responsibility

It is of vital importance that rescuees are brought to a “Place of Safety”. The study analysis to which extend third countries can be considered "safe" and NGO rescue vessels can be obliged to disembark rescued migrants and refugees in places which are unsafe.

Of Engineers and Visionaries: Germany and France as Partners for Saving the Multilateral Order

Analysis
Close coordination and smooth cooperation between Berlin and Paris is crucial for Europe and its foreign politics, particularly considering rising intricate geopolitical rivalries. Differences in style and approach must not impede cooperation on substance and common interests.
By Ronja Scheler

Europe and the Western Balkans: Dull Reality and Unrealistic Expectations

Analysis
After the EU accession talks with Albania and North Macedonia have been vetoed by French President Emmanuel Macron, the question remains how and why the EU accession process for the Western Balkans seems to be going nowhere, and what this potentially means for the region.
By Zlatko Dizdarević

Brexit is a Threat to Human Rights: A Feminist Analysis

Analysis
Brexit is patriarchal and a threat to human rights. Turning a feminist lens onto Brexit, then, reveals a host of concerning power struggles running throughout the process and wider British politics. From racist and Islamophobic narratives underpinning the Vote Leave campaign, to the idealisation of Britain the Empire: Brexit is a feminist issue.
By Marissa Conway

MeTooEP: Rooting Out Sexual Harassment in the European Parliament

Article
Revelations of rampant sexual harassment and assault in the entertainment industry sparked an outpouring of testimonies from women and girls across the globe in 2017. Despite gains for equality in many parts of the world, sexist treatment and abuse remains a pervasive and universal problem. The political sphere has also been a focal point of allegations, among which the European Parliament.
By Beatrice White

Analysis
Why EU-integration? Why should the Western Balkans, a region where criminal networks have been gaining ground and corrupt elites have systematically captured state institutions for the benefit of their own criminal business models, enter the EU? Why, when human rights are trampled upon in the region, with manifestations of nationalist radicalization overall? One can hear these questions repeatedly in the political discourse.
By Marion Kraske

The EU, its institutions and all Member States must prioritize urgent action in order to implement the Paris Agreement's goal to limit the increase in temperatures to 1.5°C. The MFF 2021-2027 is the last investment cycle to help change course, and a stronger climate performance is urgently needed to reach our 2030 climate targets.