The Macroeconomics of a Green Transformation: The Role of Green Investment 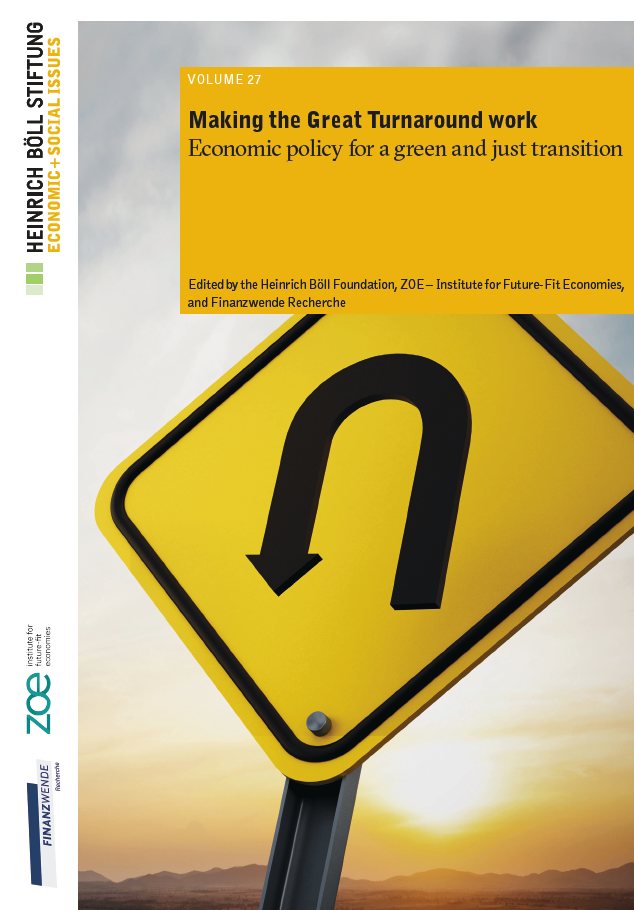 The “Green New Deals” that are underway and being contemplated on both sides of the Atlantic entail major investments intended to reduce the environmental impacts of economic activity. McKinsey & Co. has estimated that reaching net-zero greenhouse gas (GHG) emissions by 2050 will require about $275 trillion of cumulative spending on physical assets over the next three decades.[1] No equivalent estimate of costs is available for addressing other globally significant environmental problems, but we can be confident that they would be very substantial. Successful mitigation of and adaptation to the climate crisis, biodiversity loss, shortages of fresh water, and more will be determined by the kind of investments made today and their relation to macroeconomic objectives. [2] Some of these objectives have recently received increasing attention, such as inflation and public debt, both in the European Union (EU) and the United States, and others such as full employment, income inequality, and private-sector debt remain matters of concern.

What is meant by green investment? Starting from the taxonomy of green investment put forward by the EU to facilitate sustainable investment,[3] we propose a further classification of green investments based on their different macroeconomic implications rather than on different technologies and environmental objectives as is more common. Then we present three scenarios simulated using the LowGrow SFC macroeconomic model – a base case, a modest green transformation scenario, and an ambitious green transformation scenario – to help illuminate trade-offs among environmental and economic objectives. LowGrow SFC is specially designed for exploring long-term transformational macroeconomic scenarios in which the rate of economic growth is determined rather than assumed, GHG emissions and other environmental pressures are responsive to various interventions, and financial flows in the economy are tracked along with sector balance sheets.[4] The paper concludes with some observations about why we should not allow the pursuit of economic growth to be an obstacle to a green transformation and the respective roles of the public and private sectors in financing green investment.

A taxonomy of green investment

Investment is the economic bridge to the future. The scale and composition of investments made today will determine the capital stock that will be available in years to come. This stock of real, physical capital includes built infrastructure such as roads, railways, harbours, and airports; water and sewage systems; power plants, refineries, pipelines; and buildings and equipment. Real physical capital should not be confused with financial capital, though the two are related. Investment in the physical capital stock must be financed, but it is the real capital – designed and operated by people and powered by energy – that provides the goods and services produced and consumed in the economy.

Green investment is investment in real capital with the primary objective of reducing the environmental impacts of economic activities. This includes investment in equipment that reduces emissions of GHGs, such as more efficient heating and lighting, and in solar arrays and wind turbines to replace fossil fuels. It also includes investments that reduce the risk of adverse impacts of climate heating, such as barriers to protect coastal settlements from rising sea levels. The primacy of such environmental objectives distinguishes green investment from other investments whose main purpose is to add to real capital stocks and increase economic output. In the private sector, investment is primarily about generating profits. In the public sector, it is to achieve economic growth and other policy objectives.

The EU’s “Green Taxonomy” on Sustainable Finance (Regulation 2020/852) is very useful for clarifying the scope and meaning of green investment. According to this taxonomy “environmentally sustainable investment” (understood here as green investment) 1) must make a substantial contribution to one of six environmental objectives (climate change mitigation; climate change adaptation; sustainable use and protection of water and marine resources; transition to a circular economy; pollution prevention and control; and protection and restoration of biodiversity and ecosystems), 2) does no significant harm to the other five, and 3) must meet minimum safeguards such as the UN guiding principles on business and human rights. The EU regulation includes 35 economic activities that contribute to the six environmental objectives such as improving investment in energy efficiency, switching to the use of sustainably sourced materials, and nature and biodiversity conservation. [5]

These two criteria can be combined to give four categories of green investment, with different implications for the productive capital stock and aggregate demand, and therefore different effects on the macro economy and a green transformation. Simply put, short-term macroeconomic effects depend on the extent to which green investment is additional, and long-term effects depend on the extent to which it is productive. If these distinctions are overlooked and the implicit assumption that all green investment is productive and additional, the macroeconomic implications of a green transition can be seriously misconstrued.

Based on the available information, it is not possible to estimate what proportion of the 35 economic activities listed in the EU Taxonomy regulation that meet at least one of the six environmental objectives should be categorised as productive or non-productive, or a combination of both. A casual assessment based on whether the activities are likely to produce marketable goods and services that can be sold at a profit suggests that 3 of the 35 are, or will soon be, productive (e.g. clean or climate-neutral mobility), 8 are a mix of productive and non-productive (e.g. increasing the recyclability of products), and 24 are non-productive (e.g. protecting the environment from the adverse effects of urban and industrial wastewater discharges). The predominance of non-productive green investments is not surprising since most, if not all, of the benefits generated are not captured in market transactions.

It is difficult to understand the macroeconomic implications of these different kinds of investments, but some useful insights can be gained with the use of the LowGrow SFC simulation model of a national economy.[6] LowGrow SFC is a systems dynamics model of the type used to analyse natural, social, and economic systems in which positive and negative feedbacks play an important role in determining system behaviour. The model estimates change in a wide range of indicators – including GDP, unemployment, public- and private-sector debt, income inequality, GHG emissions, and material flows – through the interplay of standard economic factors such as investment in capital, household and government spending, and finance. As well as these demand-side factors, the dynamics of the model are determined by the relationship between the capital stock and labour productivity. The model is calibrated for Canada, and a United Kingdom version is in preparation.

As shown in Figure 1, LowGrow SFC consists of five interconnected sub-models. The Real economy sub-model is of the production of goods and services using labour, capital (buildings, equipment, and infrastructure), materials, and energy. In the Financial sub-model, financial flows among the sectors of the economy are tracked, as are their financial assets and financial liabilities. The Electricity sub-model captures the shift from fossil fuels to electricity generated from renewable sources to reduce emissions of GHGs. Other sources of GHG emissions are also included in the Green Investment sub-model, which is structured around the distinctions between productive and non-productive and additional and non-additional investments described above. Finally, the flow of materials through the economy – from extraction to wastes of all kinds – is simulated in the Materials Balance sub-model.

Two green transformation scenarios – “modest” and “ambitious” – have been simulated for this paper. They differ in the scope and extent of the various initiatives introduced, as can be seen from the input values used in the simulations in Table 2. The scenarios run from 2022 to 2072 and are compared with a base-case scenario with no new initiatives. The green transformation initiatives start in 2023 and are phased in over 10 years, except for the material flows initiatives, which are phased in over 50 years.

Some of the key results from the simulations are shown in Figure 2.

Many environmental impacts can be traced back to the massive quantities of raw materials used in large and growing national economies. These will only become more severe in the base case, where total material flows increase by 72%. There is a modest reduction of 22% in material flows in the modest green transformation scenario, and a 70% reduction in the ambitious green transformation scenario.

These scenarios are not predictions. They are intended to provide an initial, indicative, and quantitative estimate of what a green transformation in Canada and similar developed economies might look like at an aggregated, macroeconomic level. By comparing them, we can see that the faster economic growth in the base case comes at the cost of unrelenting and unacceptable increases in GHG emissions and materials. These increases are reversed in the modest green transformation scenario with substantial green investment and slower economic growth, but not sufficiently to reach net-zero GHG emissions by 2050. Net zero by 2050 is achieved in the ambitious green transformation scenario, materials are much reduced, as is income inequality, while the rate of economic growth slows further.

The scenarios suggest that, taking Canada as an example, a substantial increase in green investment in developed economies can help bring about a green transformation that will achieve a range of environmental, social, and economic objectives while economic growth slows, possibly ceasing completely. Indeed, if priority is given to the pursuit of economic growth, it will be an obstacle to a green transformation, since productive investments in the private and public sectors will take priority over essential non-productive green investments. All investment adds to GDP, but if green investment simply displaces other investments, the net effect on aggregate demand will be zero. This holds whether the green investments are productive or not. However, over the longer term, if a substantial proportion of green investments are non-productive, in the sense that they do not add to the economy’s capacity to produce marketed goods and services, the rate of economic growth in a green transformation will be sharply reduced. This is to be expected, since much of the investment required for a green transformation for mitigation and adaptation is likely to be non-productive.[7] However, growth in GDP should not be a goal. GDP is an inadequate indicator of well-being, not least because it ignores environmental damage and other costs. As the simulations illustrate, the ambitious green scenario is the one in which GDP increases barely at all, performs the best environmentally and socially (through reduced income inequality and reduced working time), and lowers household indebtedness.

[7] See Mason (2022) in this series for a different perspective on the macroeconomic implications of green investment (climate-related only) but which crucially does not distinguish between productive, non-productive, additional, and non-additional green investment.

[8] See van Lerven (2022) in this series for a useful discussion of green transition financing.

Making the great turnaround work: Economic policy for a green and just transition

Dossier
This publication series aims at contributing to the emergence of a transformative economic thinking, integrating environmental, social, and economic dimensions, after the wreckage of neoliberal economic thought that clearly has reached its date of expiry. It is the product of a collaboration of the Heinrich-Böll-Stiftung, the ZOE Institute for Future-Fit Economies, and Finanzwende Recherche.

Winning the Marathon and the Sprint: Achieving long-term economic policy objectives in an era of short-term responses

Paper
This article wants to provide food for thought on what a long-term economic policy could look like. In the context of the climate crisis, increasing inequality, the loss of biodiversity and financial instability, the challenge is to craft a strategic approach that can set the course for long-term success.
By Jonathan Barth, Jakob Hafele and Adam Tooze