Germany, the Netherlands, Norway, Czechia, Cyprus, and Russia are just some of the European countries set to hold national parliamentary elections in 2021. Beyond that, voters have the chance to elect crucial regional and local assemblies, for example, in Scotland and Catalonia. The following article sheds light on elections relevant to the European Green Party (EGP) in the next twelve <months in the EU and beyond. It will show that the Greens have the chance to change the face of the continent, as they are well-positioned to perform strongly in multiple electoral races in powerful states and regions.

Read the first part of Tobias Gerhard Schminke's analysis: "The present and future of the #GreenWave – Part 1: The Present".

2021 will be a fascinating year for electoral enthusiasts and European Green Party supporters alike, as the Presidential election in Portugal (24 January), the parliamentary snap election in Kosovo (January), and the national parliamentary election in Liechtenstein (7 February) will all set the stage for a hot election year. In Portugal, João Ferreira is the candidate of the Coligação Democrática Unitária (Unitary Democratic Coalition) alliance of which the EGP member Partido Ecologista "Os Verdes" (Ecologist Party "The Greens") is a constituent. Recent polls suggest that Ferreira, himself a member of the Partido Comunista Português (Portuguese Communist Party), is polling at between two and five percent of the vote. Meanwhile, incumbent centre-right President Marcelo Nuno Duarte Rebelo de Sousa is polling between 58% (Intercampus poll) and 67% (Pitagórica poll), which leaves little opportunity for his opponents to challenge his re-election.

Liechtenstein and Kosovo have no registered European Green Party members, even though Liechtenstein's Freie Liste (Free List) was part of the Bodenseekonferenz, a gathering of Greens from German-speaking countries in 2020 and applied for EGP membership in the 1990s.

Key races to watch – Germany, the Netherlands, Scotland and Catalonia

One of the first critical races for European Greens to watch will be the regional parliament elections in Baden-Wuerttemberg alongside Rheinland-Pfalz on 14 March. Baden-Württemberg is the only region where Bündnis 90/Die Grünen (Alliance 90/ The Greens, GRÜNE) has a regional prime minister. If the German Greens do well in Baden-Wuerttemberg, their battle in following regional elections (Thuringia on 25 April, Sachsen-Anhalt on 6 June, Berlin and Mecklenburg-Vorpommern in the autumn) could be more comfortable. In Berlin, the Greens are currently well-positioned to grab, for the first time, the mayorship. All German regional elections lead up to the grand final in 2021, the German national parliament election, where the Greens, for the first time, have a realistic chance of winning the chancellorship and, subsequently, having a green German member in the European Council. Even if the Greens do not achieve this ambitious target, it is unlikely that the other German parties will form a government against them. Whether this will be in a junior or a senior role will also depend on how well a future Christian Democrat (part of the EPP group in the European Parliament) leader will be able to poach centrist voters from Bündnis 90/Die Grünen. Merkel’s Christian Democratic Union will hold a leadership election on the 15th and 16th of January. As of now, the Europe Elects polling average shows 18% for Bündnis 90/Die Grünen. It would be the best result for the party, whose current national parliament electoral record high stands at 10.7% (2009).

The German elections are not the only ones in Europe that can expect significant international attention. Voters in the Netherlands are heading to the polls on 17 March to elect a new national parliament. The Dutch political party system has proven extraordinarily volatile and fragmented in recent years. The bizarre level of fragmentation becomes particularly clear when considering that, one year ago, the liberal VVD (part of the Renew Europe group in the European Parliament) of Prime Minister Mark Rutte was the largest party, polling around only 14%. While the party system has consolidated since in favour of VVD, the Dutch Greens are still in a position to become, for the first time, the fourth-largest party. Currently, GroenLinks (Greenleft) stands at 7.2% in the Europe Elects polling average, just below their best result ever in a national parliament election (9.1% in 2017).

This year we will also see elections in three regions with strong independence movements. In Catalonia, EGP member Equo pledged support to the left-wing En Comú Podem (In Common We Can) alliance in the 14 February regional election. A recent SocioMétrica poll suggests that the alliance will achieve a result of around 7.7%. That would be close to what they gained in the previous election in 2017.

Election fans should also not miss out on the culmination of the electoral cycle in Scotland and Wales on 6 May. In both regions, Green parties fight for independence from the United Kingdom. If Greens and their independentist allies get a good result, it will further fire up the movement against the Johnson rule from London. The latest opinion polls in Scotland show that a slim but growing majority of decided voters now support independence from the UK. A recent Savanta ComRes poll suggests that the Scottish Green Party is edging towards doubling their result of 2016 when the party reached 6.6% of the regional vote.

In Bulgaria, increased voter volatility and political party system fragmentation – triggered by large-scale demonstrations against the centre-right and national conservative incumbent Borisov government – have created a chance for smaller parties. One among them is the Da, Bŭlgariya! (Yes, Bulgaria) alliance, made up of the centre-right DSB (part of the EPP group in the European Parliament) party and Zeleno dvizhenie (Green Movement), with DSB being the more dominant actor. With this alliance's help, Greens could join the national parliament for the first time in the upcoming spring elections. DB stood at 5.2% in the Europe Elects polling average in December 2020, just above the national 4% legal electoral threshold. Bulgaria also holds presidential elections in November 2021.

Recent polls for the 23 May national parliament election in Cyprus indicate that the Green party KOSP has a realistic chance of beating their previous record-high of 4.9% (2016) by a few percentage points. ‘Miljøpartiet De Grønne’ is preparing for a very similar trajectory and level of support, as the national parliamentary election will take place in Norway on 13 September. In Czechia, where elections are scheduled to take place on 8-9 October, ZELENÍ (‘Greens’) defies the upward trend of their European partners. Polls see them at around one percent, which is far below their 2006 record high of 6.5%. This current weakness is also affected by the Pirate Party, which reaches up to 20% in polls and occupies most of ZELENÍ's potential pool of young, urban, well-educated and high-income voters.

National parliament elections will also be held in Albania (25 April). However, it is not clear if and how the European Green Party member Partia e Gjelbër will participate in the election. In Iceland, national parliament elections will be held on 23 October, but no party is affiliated with the European Green Party. The the situation is the same for the Isle of Man, where less than 80,000 eligible voters will elect a new parliament on 23 September.

In 2021, it will be worth keeping track of elections at the regional and local levels. For example, in the summer of 2021, regional parliament elections in France might produce several Green waves that could even prepare the path for an independent and robust Green presidential candidate in 2022. 2020 saw Green record results in several regional elections in Switzerland, which could be repeated this year in the regions Wallis and Solothurn (7 March), Neuchâtel (18 April), and Fribourg (7 November). Local elections will occur in several EU capitals, such as Helsinki (18 April), Rome (spring or summer) and Copenhagen (16 November).

Russians will also elect several regional assemblies and the national parliament on 19 September. The EGP member Zelenaya Rossia (Green Russia) is the green wing of the party Rossíyskaya ob" yedinonnaya demokratícheskaya pártiya «Yabloko») (Russian United Democratic Party "Yabloko"). The authoritarian and undemocratic environment will make it difficult for Yabloko to get any seats. It will be interesting, however, to see if a similar pro-democracy movement in Russia appears in the same manner as the international audience witnessed in Belarus or the Russian region of Khabarovsk Krai in 2020.

The accuracy of election dates mentioned here depends on whether authorities can conduct elections during the coronavirus pandemic. The beginning of 2020, for example, saw most elections in Europe postponed by several months.

From a European Greens perspective, 2021 could go towards both extremes: If the Greens manage to remain relevant during the coronavirus pandemic, and if they accomplish to maintain their current level of polling, they could easily see record election results in Cyprus, Germany, the Netherlands and Norway. They could see not just their first Berlin mayor, but if very fortunate, their first German chancellor. They could also see Scotland preparing to depart from the UK, returning to the EU's open arms The stability of popular support for Greens/EFA and record high-results for the Greens in elections in 2020 during the pandemic indicates that this optimistic scenario is not unrealistic to assume. However, economic and social hardships caused by the coronavirus pandemic might still be on the horizon. Topics that provide the breeding ground for Green electoral success – social liberalism and environmentalism – move to the back of the public debate in times of economic decline. As previous economic crises have shown, that could seriously dampen electoral support for European Party Green members across the continent in 2021. 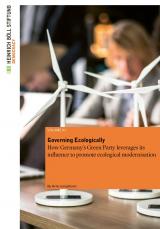