After the US elections 2020: “Europeans shared a collective sigh of relief”

Eva van de Rakt, director of our Brussels office, interviewed Reinhard Bütikofer (Member of the European Parliament, Greens/EFA) about the US election results, the priorities of the Biden-Harris administration, and the future of the transatlantic relationship.

Eva van de Rakt: Reinhard, how have you experienced the US election thriller?

Reinhard Bütikofer: The trill extended over several days and nights, but that came as no surprise. I kept checking CNN and pertinent websites about every half hour, but it soon enough emerged that the dynamic would be different from four years ago. This time, the excitement was less about whether Trump would win, but about how narrowly he might fall short. I was afraid that if the numbers in the Electoral College would turn out to be extremely close, he might find enough support to earnestly try overturning the election result. Even though the counting is still going on and recounts are due in several states, there is no doubt that calling the election for Biden was justified and will stand. Therefore, my focus has shifted towards trying to understand the new dynamics in both the Democratic and the Republican camps after this election.

How do you assess the results for President-elect Biden and President Trump?

For Biden, it’s really a mixed bag. He has been served a good personal mandate, but a weak political hand. He is the first Democratic President-elect since 1884 who cannot start his term with a safe majority in the Senate. In the House, against all expectations and predictions, Democrats lost seats and are maybe en route, if you go by historical precedent, to lose their majority in the House in the mid-terms. Democrats did not do well in State elections either. This is particularly relevant because the State Assemblies elected this year will be responsible for districting – and gerrymandering – on the basis of the most recent census. Republicans are now in complete control of 2/5 of the State Houses and Democrats only of 1/10; the rest being under divided State Government or under non-partisan districting rules. That will give Republicans a strong hand in tilting the future competitions for control of the House in their favor. It is also interesting to note that only about 50% of the Biden voters did support the Democratic electoral platform. The big reforms that Democrats promised to their voters are less than wildly popular. And the power balance in Congress will make it very difficult to pursue many of these plans.

For Trump, the result combines a repudiation, because he lost, with the promise of considerable continuous influence, because he managed to increase his absolute share of the vote by several million. Trumpism is here to stay and Trump tries to make his defeat invisible in front of our eyes in order to cement his position. No Republican has ever come close to the vote count that Trump can now boast of. I am afraid that the overall result will enable Trump to keep control of the Republican Party and to call the shots for an extremely confrontational strategy over the next four years.

What will the priorities of the Biden-Harris administration be?

Biden understands that he first and foremost must deal with the COVID-19-pandemic. And he has already started to move on that front by nominating a team of scientists to create some rational policy guidance. The degree to which he succeeds here will be decisive for all other plans he may harbor. Discussions between the different wings of the Democratic Party that had been so uncharacteristically disciplined during the campaigns, are now resurfacing. Progressives might for instance want to see Sanders and Warren as members of the Biden cabinet. Sanders has explicitly said he wants to be Labor Secretary and such positions would give the progressive Democrats much more leverage than they enjoyed during Obama’s Presidency. But both, Sanders and Warren, are from states with Republican Governors and if they leave the Senate, they will be substituted by those Governors with Republicans. So that’s tricky.

Biden says his overall priority will be “healing”, overcoming the deep divisions, building bridges. That is a noble idea, but not an easily attainable one. In order to be able to do that, he would have to pursue policies that create a much higher level of attraction with engrained Trump voters, particularly in the country side, while avoiding to disappoint and discourage his own core electorate, for instance people of color and in particular black women that voted for him with more than 90%. He might get lucky in early January, if Democrats win both run-off elections for the Senate from Georgia. But if not, Mitch McConnell will probably block everything he can.

Additionally, Biden will be inheriting an extremely conservative Supreme Court and an exceedingly high debt. Both will limit his scope of action. Biden will have to rely a lot on executive orders, but of course the control he has over executive departments will give him some leverage. Fundamental reforms like dealing with health care, student loans, minimum wage, electoral reform, fighting structural racism, tax reform or passing a major investment package - Democrats would love to see a 2.2 tn investment package! - will be hamstrung without control of Congress. Of course, he will own the bully pulpit of the Presidency which he hopefully will use to change public discourse, to set a new tone of disputes and to create attention for new priorities. Altogether, the task he has in front of him, could be called the “13th labor of Hercules”. 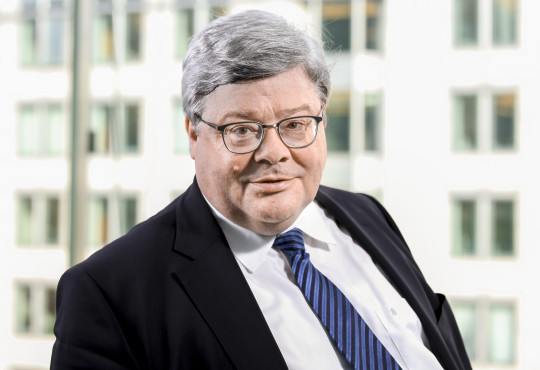 Reinhard Bütikofer is a Member of the European Parliament (Greens/EFA). He sits on the Committee on Foreign Affairs (AFET), where he serves as Greens/EFA foreign affairs spokesperson, and on the Committee on International Trade (INTA) as a substitute member. He is the Chair of the European Parliament’s Delegation for Relations with the People’s Republic of China as well as a member of the Delegation to the United States and a substitute member of the ASEAN Delegation.

How do you interpret the reactions of the European institutions and Member States? How can the EU pave the way for a future-oriented transatlantic relationship based on trust, respect, and common values?

Europeans, including most European leaders, shared a collective sigh of relief. They demonstrated their eagerness to work with Biden by congratulating him at the soonest possible point in time and they did that in a coordinated way. In fact, Biden has been congratulated by six times as many European leaders than Republican Senators. Only the Slovenian Prime Minister made a complete fool of himself by congratulating Trump. I believe it is important that many European decision-makers clearly stated their intention to not just wait for new Biden initiatives, but to pro-actively help shaping a reinvigorated transatlantic agenda themselves. That’s a very good approach, we can only hope it will come to fruition. I hear from the European Commission that they work on an agenda with three priorities: climate, China, security.

What does the victory of President-elect Biden and Vice President-elect Harris mean for the future of multilateralism and the cooperation in the framework of international institutions and agreements?

We should take Biden up on his word that he will rejoin the Paris accord and the WHO and try to negotiate common initiatives for the Glasgow COP and for WHO reform.

On the JCPOA (Joint Comprehensive Plan of Action, known as the Iran nuclear deal), which Europe has upheld against Trump’s sabotage, I am not overly optimistic in the short-run. Even among Democrats in the Senate, the JCPOA is not uniformly popular and Biden will have to move carefully. While on the other hand, Iran might become a more difficult negotiating partner if the Conservatives there win the Presidential election in June next year. I have no doubt that Biden will continue to be a staunch supporter of the EU and of NATO. But he will not relent from the American demand that Europeans should do more to invest collectively into their own security. Biden will expect Europe to play a stronger role on security matters in the European neighborhood.

In general, Biden does believe that alliances and multilateral cooperation are in the US’ interest. But he will probably also be very clear in signaling that he wants US allies and partners to support the US in the hegemonic battle with the rising Chinese superpower that will be most intense in the Indo-Pacific region, but also play out on many other fronts.

What impacts or possible changes do you expect regarding EU-US trade relations?

On the trade front, we should start rebuilding trust by focussing on relatively low-hanging fruit like for instance an agreement to support Ngozi Okonjo-Iweala for WTO Director-General, a resumption of the negotiations over a WTO Appellate Body reform and a serious effort to finally get over the age-old Boeing-Airbus-mess and to find a compromise instead of lambasting each other with retaliation measures. Nobody should expect a new attempt for a big trade deal like TTIP. It is not going to happen. And Biden will most probably continue to pursue some quite protectionist trade policies because that is popular with important constituencies of his.

During the last days, we could hear quite often that Trump might run again for president. What do you think, who could be the presidential contenders in 2024?

I had the chance of asking the same question three weeks ago to Frank Luntz, a well-known US political consultant. He listed four Democrats and four Republicans nobody in Europe has ever heard of. Who knows? Obama was an outsider candidate when he decided to run in 2008. But I would not be surprised if we would again see two names that were on the ballot this time: Kamala Harris on the Democratic side and the @realDonaldTrump for the other party that used to be the Republicans before they became a racist, misogynous, populist, isolationist, climate-policy hating army of foot soldiers for the worst and most authoritarian President in American history.

Reinhard, thank you very much for the interview. Let us hope the EU will pro-actively contribute to a future-oriented transatlantic agenda, and that Trumpism will not dominate the years to come!

US election 2020: Of winning a victory for liberal democracy - and inheriting a pile of rubble

Analysis
The election of Joe Biden and Kamala Harris is a significant victory for liberal democracy in the US and for a policy of compassion and cooperation. At the same time, the new government is facing a political pile of rubble full of enormous challenges.
By Bastian Hermisson

Interview
The murder of George Floyd has thrown the United States into a state of unrest. President Trump is throwing fuel on the fire in an attempt to increase his re-election chances. The main problem, however, is historical, structural racism – and not just in the U.S. An interview with Bastian Hermisson, Head of the Foundation’s office in Washington, and Mekonnen Mesghena, Head of Migration and Diversity at the Heinrich Böll Foundation in Berlin.
By Bastian Hermisson and Mekonnen Mesghena

The coronavirus crisis: Where the Trump administration went wrong

Background
The US government’s crisis management has been a disaster so far. Donald Trump has three basic tendencies, which have served him well in the past as a populist, but which will cause severe damage to the US population in this situation and may usher in the end of his political career.
By Bastian Hermisson