On 1 July, Germany takes over the Presidency of the Council of the EU. The coronavirus and economic crises are still raging, but the climate crisis cannot afford any delay. For this reason, the German government must fight for a Real Green Deal for Europe that combines economy and ecology and sets the course for a socio-ecological market economy. Dr. Ellen Ueberschär, Co-President of the Heinrich Böll Foundation, describes what that could look like.

After more than 13 years, the Federal Republic of Germany will once again take over the Presidency of the Council of the European Union on 1 July 2020. In 2007, the EU was at a crossroads. France and the Netherlands had rejected the EU constitutional treaty in referendums and it fell to Germany to breathe new life into the constitutional process, which later gave birth to the historic Lisbon Treaty.

The EU could emerge stronger from the crisis

In 2020, the European Union is once again at a crossroads, but of a very different nature: the coronavirus pandemic has brought Europe to an unprecedented standstill, with economic consequences that are as yet impossible to predict. After a first phase of uncoordinated responses from the Member States, the European Commission has now tabled a proposal for a recovery programme (#nextgenerationEU), which has inspired great hopes for those who have been particularly hard hit by the crisis. It is based on an initiative announced earlier by President Macron of France and Chancellor Merkel of Germany. The proposal, which has been given the blessing of the Parliament, must now be debated in the Council – alongside the Multiannual Financial Framework – and could allow Europe to come out of the crisis economically and politically stronger than before.

There is little time to be lost, as major threats already exist and have simply been temporarily overshadowed by the public health crisis. The effects of unbridled climate change are already making themselves felt. In 2020, just as was the case in the summer droughts of 2018 and 2019, there has been hardly any rain. Almost all of Europe is being baked dry.  The coronavirus and economic crises are still raging, but the climate crisis cannot afford any delay. To halt climate change, Europe must transition to a consistent green economy, without neglecting social matters. And this is precisely what the recovery programme has the potential to do.

As soon as it took up office, the Commission led by Ursula von der Leyen acknowledged the gravity of the situation. It tabled a “Green European Deal” and also proposed “green investments” for the next EU budget. Neither of these projects is anywhere near implementation; just because something has the word green on it, it does not mean that there actually is any green in it.

Fighting the economic and climate crisis at the same time

In reference to the consequences of the coronavirus crisis, the voices arguing the case against “burdening” businesses with climate policy, are growing louder. They are calling for economic policy to be grey, not green. But this in itself is a misunderstanding laden with consequences: there is now ample evidence that there is no contradiction between ecology and economy, and that they can mutually support each other. Green investments could bolster Europe’s productivity, which has been declining for decades. Climate protection generates new business models and creates jobs; innovative companies contribute to the green transition. The fact that this works is demonstrated by a recent study of the University of Oxford, which analysed 700 fiscal stimulus measures. The findings were that green projects create more jobs, deliver higher short-term returns per dollar spend and lead to increased long-term cost savings, by comparison with traditional fiscal stimulus.

For this reason, the German Presidency of the Council has an historic task in front of it: with a Real Green Deal, it could tackle the economic crisis and the climate crisis at the same time. To achieve this, the billions of euros currently being injected into the European economy would have to be spent on introducing structural reforms, to set the course for a socio-ecological market economy. A Real Green Deal needs:

When presenting the “Green European Deal”, Ursula von der Leyen framed it as a "man-on-the-moon" moment, comparing her deal to the moon landing. Such pathos needs to be underpinned by concrete activities and not remain empty rhetoric. Although there is considerable opposition from several European governments and various industrial lobbies, a clear majority of European citizens is in favour of a strong European climate policy.  For Germany, this is also reiterated by a survey commissioned by the Heinrich Böll Foundation entitled “Selbstverständlich Europäisch” (European, of course): most Germans are willing to earmark more money for European investments in future issues – particularly under the heading of climate policy. Europeans want a Real Green Deal. A window of opportunity is opening up for the German Presidency of the Council to use the billions of the recovery programme to make significant progress with the Green Deal. 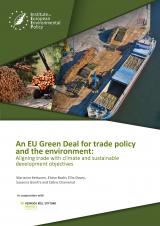 An EU Green Deal for trade policy and the environment

The EU is the world's largest trading bloc. It provides the biggest export market for around 80 countries; and EU Member States account for 16% of world imports and exports. Consequently, the EU has a considerable impact on third countries through trade, including the way in which international trade is conducted and how environmental and wider sustainability related aspects are addressed. This policy paper explores what a truly green EU trade policy under the EU Green Deal should look like.

10 ways of thinking about crisis resilience

Commentary
It is still too early to learn lessons from the coronavirus crisis. However, there is one term that comes to mind when addressing the inevitable directions of political thinking after the crisis: resilience. But what exactly does it mean and how will it influence the political agenda?
By Dr. Ellen Ueberschär

Transformative Responses for a way out of the crisis

Statement
Transformative responses is a transnational network which aims to increase our systems' resilience by addressing the socio-economic and ecological challenges at the intersection of finance, ecology and inequality with concrete actions and policies to mitigate crisis and initiate structural reform.
By Heinrich-Böll-Stiftung